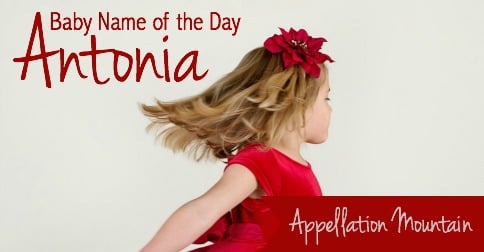 Antonia is a lovely, literary name that almost hit it big in the 1990s – but didn’t.

Now our Baby Name of the Day is back in the US Top 1000, and seems poised to catch on at last.

Anthony is an evergreen classic, a name that has never left the US Top 1000, and has been in the Top 100 nearly every year.

All of the Anthony names trace their roots to the Roman family name Antonius. Mark Antony is the most famous of the Antonius clan, immortalized by Shakespeare.

For all Antony’s fame, the name’s roots are obscure. Most sources agree it is Etruscan, but the meaning is lost to time. It’s remained popular over the centuries, and throughout Europe, thanks to two saints: the third century Egyptian hermit Saint Anthony, and Saint Anthony of Padua, who came along about a thousand years later.

The ‘h’ is a creative addition, based on the Greek anthos – flower.

There are plenty of feminine forms, like Antoinette and Antonella. But Antonia is the most common, heard in more than a dozen languages. 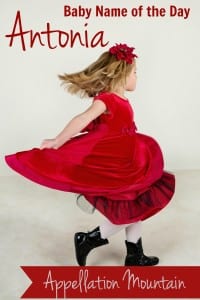 Cather’s story is about the lives of Nebraska pioneers. Jim Burden is an orphan traveling to live with his grandparents. Antonia is the daughter of immigrants. She and her family are the nearest neighbors to Jim’s family. They become friends, assisting each other in various ways through a difficult winter, and through the years that follow. It’s a story that ends happily, but it’s no fairytale.

Antonia: By the Numbers 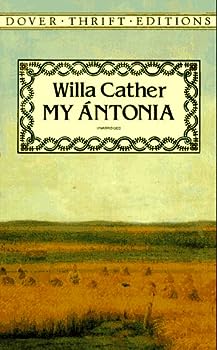 For years, Antonia was a steady rarity. The name ranked as high as the 300s, but never left the US Top 700.

Besides the televised version of Cather’s classic work, there was a 1995 Dutch film called Antonia’s Line, another story that might have boosted the name, at least after it won the Academy Award for Best Foreign Language Film.

It also fit with 1990s favorites like Alexandra and Samantha.

Antonia: Beyond the Novel

There are other famous women by the name, including at least one queen and a handful of princesses. You might also think of:

It’s an eclectic bunch, probably because the name has never been really common in the English-speaking world. It’s more familiar in Europe, and in parts of Latin America, too.

If you love strong names for girls like Eleanor and Amelia, but want something less popular, this name belongs on your shortlist. While Antonia returned to the US Top 1000 in 2014, it’s still a nicely under-the-radar choice.

What do you think of Antonia? Would you consider it for a daughter?