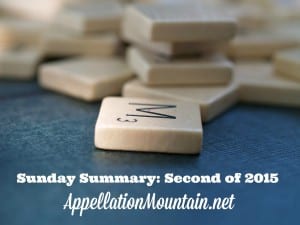 We’re staring out this week on a sad note.  Kay of Nook of Names has passed away.  There’s a brief note up on her blog if you’d like to express your condolences.  She was such a force for exploring under-used names, and generous with her time and knowledge.  My condolences to Kay’s loved ones.

On a very different note, Nameberry let me take the wheel for their Friday slideshow, the one that ends up on the Huffington Post a few days later.  It didn’t hit me until I’d already submitted the final text that this meant I would actually have a HuffPo byline.  Which is good, because if I’d actually thought about it, I’m sure I would have obsessed over every syllable and generally made myself insane.  You can read the article here.

I posted the article to my personal Facebook account, and it sparked a debate over one of the names.  No, not Roscoe.  The enduring Peter.  One friend insisted that it would lead to teasing. Another friend is married to a (great) guy named Peter, and she replied that he can’t recall that it ever happened.  And so, tell me – have you ever been teased for your name?

Back to Nameberry for a minute – here’s everything you ever wanted to know about Pam, one of the site’s co-creators.  One of her novels has been adapted as a television show starring Sutton Foster!  Does it go without saying that I’ll be watching Younger when it debuts?  The book is definitely worth a read – both light and serious, and I think it will make a great show.