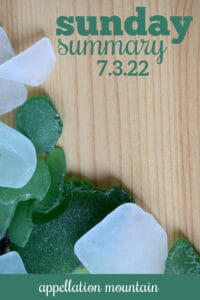 No, seriously. I go wild for it. Practically speaking, I know it’s just busted up beer bottles, tumbled in the surf until they’re pretty. It’s sometimes called a reverse gemstone.

But I think there’s a lesson in sea glass for those of us choosing names. (I mean, of course I think that.)

When a name is new – recently debuted in the US Top 1000 after stealthily rising for years, unearthed by a hit period television show even though it’s been hibernating since FDR was in the White House, catapulting on to the charts thanks to a reality starlet’s new baby – it’s broken glass.

Rough around the edges. Hard to handle.

We’re not always sure how to spell or pronounce it. We pigeonhole it immediately – oh right, like that character/so-and-so’s kid – or we’ve never heard it at all.

But tumble it in the surf of general use for a decade or so?

It becomes approachable. Accessible. There’s now one obvious spelling. (And not always the one that started out most popular.) We hear it on more birth announcements, read it on more fictional characters, see it mentioned on the news as the name of the local kid who just won the swimming competition/spelling bee/lead role in the musical.

There’s nothing wrong with choosing a newer name. But it’s raw – some of the edges are jagged. You’ll have to spell and pronounce and explain. And accept that it will be misheard and misremembered far more than seems reasonable.

Of course, that can be a good thing, too. Maybe you’re hoping for a name that’s distinctive.

But most of us? We’re looking for the piece of glass that started out as an old milk bottle in the 1930s, car tail lights back when Buddy Holly was on the radio, or maybe just a Rolling Rock beer circa 1973.

Names tumbled and textured by use into something even better than when they first began.

My daughter is named after my mom, but name a child after myself? It doesn’t feel quite right. This article in The Atlantic asks why there are so few female juniors. It really is a hard-wired cultural bias. I know a mom who gave her name to her daughter and I couldn’t get over it. And then they had a boy, and named him after the dad, and I reacted as if that was completely normal. And I didn’t think that I thought like that, but apparently I do!! Anyway, I’d just finished reading an interview with James Corden, appreciating that his second child has his wife’s surname as her first name. (It’s Carey.)

I love these First versus Third Baby POVs. Especially the baby names part, of course. I’m convinced that the rise of Paw Patrol character names is thanks to so many exhausted mamas putting on just. one. more. episode for their toddler during that loonnnggg third trimester and subconsciously deciding that Ryder or Everest really would be great for this new baby. (There absolutely is a universe in which my daughter could’ve been named Rosie, after the girl train in Thomas.)

Does the return of Winnie, Goldie, and Birdie make space for Minnie, Georgie, and Lulu? I think the answer is a cautious yes. But … I’d also argue that Sadie gets credit for kicking off the trend. Possibly even Molly. And we already have Daisy and Millie and Stevie. So … while maybe it’s accelerating, I’m not sure if it’s really new. More from Laura on the current crop of reanimated zombie (ha!) girl names here.

On the other hand, I think British Baby Names’ list of Funky-Clunky Names could be the next big thing. It would represent a sharp turn in style, but now that every kid is called Henry and Isla and Luna and Oliver, well … Ambrose, Cedric, Montgomery, Judith, Betty, and Opal do sound kind of fresh. Her list totally nails my girls’ style. My top two girls’ names are here, along with the nickname I’d use for one of them. I lean a little more modern for boys, but appreciate those choices, too.

Let’s end with a great story: the Colorado Avalanche just won the Stanley Cup. Congrats! Love this story of a baby named MacKinnon for the team’s star center. Not just because it’s a cool name with a fun story behind it. But because it sounds like they named their son for the player’s personal qualities, not just his athletic prowess. (Which reminds me: these names are perfect for ice hockey fans.)

Can’t get enough name talk? Sign up for the newsletter, sent every Tuesday: 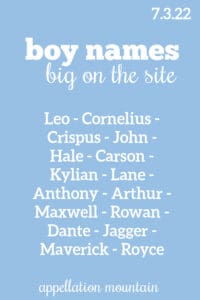 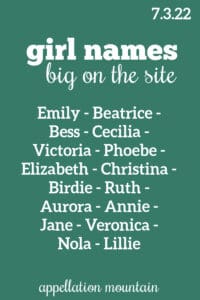