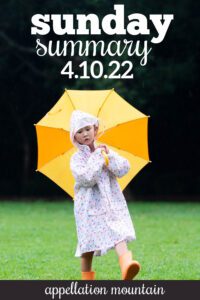 Maybe that’s true for you, too. Or maybe you’ve just happened on this 2020 article about Catherine O’Hara’s crazy-but-brilliant accent as Moira Rose on Schitt’s Creek. It’s worth a read just because, well, the show is smart and funny, and it’s interesting how much that voice just works.

But something else leapt out at me: Samara Bay, the dialect coach interviewed for the article, compared Moira’s vocal style to her daughter Alexis’ nearly as distinctive way of talking. She described it as:

“Two wildly different communication styles just co-existing … It’s also how reality is. They are products of two different intentions. That’s an interesting way to think about it.”

Products of two different intentions … sometimes that’s what makes it so tough to name a child with a partner, isn’t it?

We’re talking about names. Arlo or James. Millie or Margot.

Except to make a great choice, we need to think about our intentions behind the names. What matters to us? What are we trying to communicate with our naming decisions? Why these names over those names?

Sometimes couples are effortlessly on the same page. But it’s not always the case.

A name can feel equally trivial and consequential at the same time. I don’t ever want to judge someone because her parents named her Misty Rain or Elizabeth or Misty-Elizabeth-Rain. But names are short hand for lots of things, and we inevitably notice them, just below the surface.

I think sometimes talking about the WHY of naming is the key to reaching a good decision. But it’s not always easy, either!

This conversation about choosing a new surname is fascinating. It feels like one more women are wrestling with post-divorce, too. Remember the Kelly Clarkson/Kelly Brianne conversation from a few weeks ago? If it were me, I think I’d add a new middle, because, well … why not?!

A small, but maybe growing number of families, seem to choosing THREE middle names. At least in the British Baby Names birth announcements, which is obviously a very specific list. This week, it’s Archibald Edward Augustine Lewis, which sounds rather grand. I’m not sure I can wrap my head around three middle names … but I’m a big fan of two. How many middles do you think is the right number?

No idea what reminded me about THIS post, but is Olga a horrible name? I love it, but … there’s more going on in this conversation than just a discussion about a specific name. It’s from way back in 2013, so presumably the kid has a name and the drama is long since resolved. But it’s still an interesting question.

Okay … could Wanda ever catch on? The Scarlet Witch is back in Doctor Strange and the Multiverse of Madness. It feels like Wanda is still stuck in style limbo right now, but maybe that’s temporary. Another character name in the upcoming movie: Nicodemus. Hmmm … Nicodemus might be more of-the-moment than Wanda. Still … I’m always looking for the next revival names.

A look at Southern-style baby names. As someone who lives pretty much on the border between the Southern and Northern US, I feel like I knew some of this. But the data is fascinating.

Can’t get enough name chatter? Sign up to receive Tuesday’s newsletter, featuring every week’s secret list, plus more insights into all things naming.