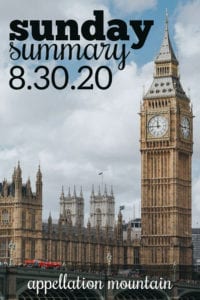 We may still be waiting on US popularity data, but we’ve got the new stats from England & Wales!

When it comes to the chart toppers, there’s not much news. Olivia and Oliver still hold the top spots. Yawn.

But there’s so much news about the names on the edges, and those on the rise.

A few reactions from an American perspective:

The full Top 1000 is worth a review, too. If there are differences between the US and UK Top 100s, they’re often a matter of degree. But when you read through the Top 1000? It’s fascinating to see so many different language and cultural influences at play.

Laura takes a closer look at hyphen-cute names. American parents debate whether Nellie needs a formal name, but British parents embrace the cuteness with picks like Nellie-Mae. And they’re not just for girls, either.

We know that the age of a child’s mother influences name choice in a big way. And some of the best proof comes courtesy of the England & Wales data. Dive into it here.

Not data related, but a British couple recently won the right to name their son Lucifer. With the success of the Netflix series, I imagine we’ll hear more of this name in the US, too. And while I get the appeal … I just plain think it’s a bad idea. Unusual names, yes – please! But names that make people stop and blink and maybe ask lots of awkward questions? I just don’t think it’s a great idea.

And … back to the US. Is Cy enough of a name to be a name?  I both say yes, and feel like I wouldn’t want it to be my name. Not in a Lucifer way! But just because like syllables, and I find Cy slightly incomplete. (Yes, I feel the same way about Ty.) But for the right family? It might be the perfect choice. 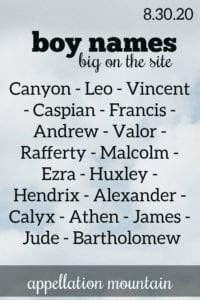 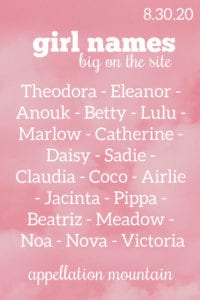