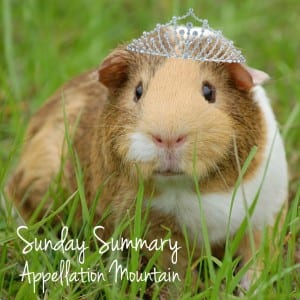 Last year around this time we were gearing up to host a guinea pig for the summer, the classroom pet of my then-third grader.

The guinea pig’s name? Princess Charlotte, named by the third grade class, meaning kids who were born in 2004.

That’s one the reasons I guessed that Charlotte would be the #1 name in 2033. My fourth grader and his classmates will be in their late 20s, primetime for having and naming babies.

But lately I’m thinking that Charlotte might have a shot at the top spot much sooner. Because this week? Charlotte ruled this week.

May started out with the arrival of Her Royal Highness, Princess Charlotte Elizabeth Diana, and general agreement that her name was just exactly right.

Then on Friday we learned that Charlotte now ranks in the US Top Ten.

So … what do you think? Will Charlotte be the #1 name in the US soon? Or will all the noise about the new princess push parents away from regal, literary, classic Charlotte?

Now, on to the rest of the baby name news:

Can’t get enough of these posts? Every Wednesday, I send a newsletter highlighting interesting things on the blog, and answering readers’ questions.