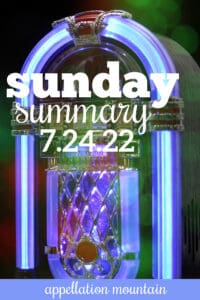 This caught my eye: in a recent Swistle post, she posited that the family needed “Baby Boomer names that are about to start sounding good again.”

Conventional wisdom tells us that it takes about a century for names to hit peak popularity, fall out of use, hibernate, and then feel fresh and interesting again. It’s why we’re wild for our great-grandparents’ names, but find our own parents’ names hopelessly dated.

Who was it that told me her 20-something nephew liked the name Janet for a future daughter?

Anyway, these things don’t happen on a perfect 100-year rotation. But Baby Boomers were born between the years 1946 to 1964, following World War II.

That means that we’re creeping closer and closer to 1940s names making a comeback. So no, it’s not too soon to think about Baby Boomer names as comeback possibilities.

I picked out some names from her list that I think could work for a boy in 2022:

What do you think? Are Baby Boomer names ready for a cautious revival? What would you add to this list?

Nancy has a rundown on the popularity data in Scotland. Their Top Ten comes so close to ours, and yet it’s so different at the same time. Millie bumped Lily off the list, which tracks with usage here, too – so maybe it’s worth watching Millie? Of course, the rarities are always the most interesting – a boy named Otter and a girl named Otterly. Zander-Blu for a boy and Ocean-Bleu for a girl. There must be stories …

I’ve never watched TLC’s Unpolished, but I’m intrigued. (After having watched my daughter get her very first manicure, there’s no question in my mind that nail art is art.) The series stars Bria Mancuso; she and husband Matthew just welcomed daughter BellaMia. It’s a super unexpected smoosh that feels like a sentence – beauty mine – but also a little like trending surname Bellamy. (Matthew is also dad to sons Logan and Ronin from a prior relationship.)

Somehow I’ve never read Where the Crawdads Sing, but I’m so interested in the main character’s name: Kya. So maybe I need to pick up a copy … or see the movie, though I hear they’re very different.

Speaking of movies, word is that Disney is adapting the classic fairytale The Princess and the Pea. Hans Christian Andersen’s tale didn’t give the princess a name. In the musical adaptation Once Upon a Mattress, she’s called Winnifred. But Disney apparently plans to name their princess Penelope. Which is just incredibly perfect for the story, so who could complain?

Check out Tip #6 on this list because first, it’s good advice – consider the name’s rhythm – and second because OF COURSE this has a name. I’ve always struggled to describe why rhythm matters in a way that syllable count does not. It’s because of duplet and triplet rhythms. So glad to know this!

Can’t get enough name news? Sign up for the weekly newsletter here:

That’s all for this week. As always, thank you for reading and have a great week! 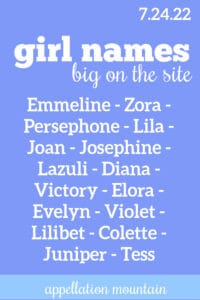 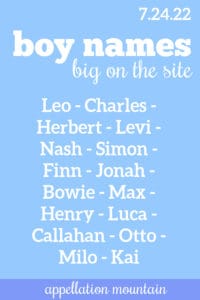