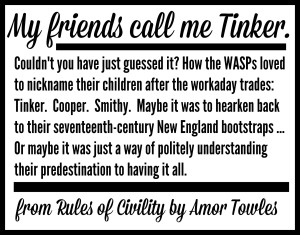 I’ve been reading fiction like a madwoman this summer.  I’m a Reader, with a capital R, under any circumstances.  But since I’ve much more free time over the last few weeks, well … books have been read, many of which had been sitting on my Amazon wishlist for years.

One of those books was Rules of Civility, by Amor Towles.  Towles has lots of great names tucked in the novel.  There’s a Wisteria, called Wyss, and a fleeting reference to another woman named Generous, plus a few other name-related observations by the main character:

Some people called me Katey, some Kate, some Katherine.  Anne cycled between the options as if she was comfortable with all of my incarnations.

Teddy to Tinker.  Eve to Evelyn.  Katya to Kate.  In New York City, these sorts of alterations come free of charge.

The quote is about another major figure – Theodore Gray, known as Tinker.

I’ve also just started book two of The Lunar Chronicles.  Book one is a re-imagining of the Cinderella story, set far, far in the future.  The fairytale heroine is now just Cinder.  Marissa Meyer is absolutely brilliant at weaving the pieces of the traditional tale into a completely readable modern storyline.  Cinder’s still got stepsisters, too, but their names are Peony and Pearl.  Other stepsister names over the years and places have included Armelinde and Maguelonne, Anastasia and Drizella, Clorinda and Tisbe, Odette and Aloisa, Noemie and Dorothee, Georgia and Lucille, Birdina and Serafina, and many more.

No one who invents a name for a color is applauded or instantly successful. It never works right away. And then, person by person, it starts to stick. The first person leaps, and leaps again, and persists, inventing something we sooner or later all decided we needed all along.