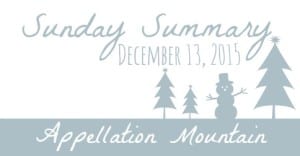 I had to look at the calendar twice to be sure – this is really the fiftieth week of the year! But of course, it must be! I’ve already run my Best Celebrity Baby Names of 2015, and reviewed last year’s predictions, too. That just leaves predictions for 2016 – coming up this Friday – and a look back at the most popular posts of the year, plus my revised name watch list.

For now, let’s take a look at the baby name news, some seasonal and year-ending, but most of it just plain fun: