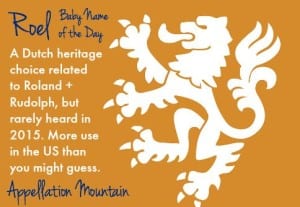 Thanks to Christina for suggesting Roel as our Baby Name of the Day.

In the Netherlands, Roel rhymes with cool, and it started out as a short form of names like Roeland and Roelof.

Roeland is from the Germanic Roland, from hrod – famous – and land. If you know your medieval epics, you’ll recognize him as the hero of La Chanson de Roland. Roelof comes from the word for famous, plus wolf. You’ll recognize the name as Rudolph, which brings to mind a very different creature – Santa’s red-nosed reindeer. Though it was once a popular royal name, as well as the name of Anthony Hope’s hero in his 1894 novel, The Prisoner of Zenda. Several big screen adaptations followed.

I’ve also found it listed as a surname, possibly related to the words rolle or rulle – a list, making this an occupational name for a record-keeper.

Roel: In the US

Add it up, and you might be surprised to hear the name used in the US.

That’s not Dutch influence, either. While short names like Bram and Sem rule in the Netherlands, Roel isn’t currently among the most stylish names.

That said, Voornamelijk listed Roelien and Roelofje among the “Good Old-Fashioned” names (forgive my translation!) with the stylish ‘oo’ sound, just like Milou and Anouk.

One guess: the name seems to have caught on in the Philippines. It may be heard elsewhere in the Spanish-speaking world, too. (Spanish has a long history in the Philippines, though Filipino and English are the official languages, and many other indigenous languages are recognized.)

Popular singer Roel Cortez sang in Tagalog. I was tempted to give him credit for the uptick in the name’s use, but the dates are wrong. Roel was born in 1967, and most popular in the 1980s – his name was part of the trend, not the reason for it.

And yet, I want to say ro ELLE when I see this name. I’m guessing that’s how the Downeys pronounce their daughter’s invented smoosh of a middle name.

Or I see the -oel and want to rhyme it with Joel.

The spelling Roehl is also seen, at least as a surname. I can’t decide if the added ‘h’ makes it easier or more confusing.

Overall, I think Roel could be a great Dutch heritage choice for parents after something different and distinctive – as long as the occasional pronunciation/spelling complication isn’t a concern.

What do you think of Roel? Is it wearable in the US? Would you automatically pronounce it like cool and rule?