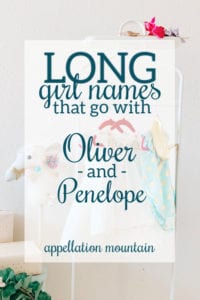 I’m due with our third child in July, and we have hit a brick wall choosing a name.

Our last name sounds like Lee, but is spelled differently. Because of that, I like longer first names that we can use without a nickname. Or, we might consider something with a nickname that isn’t very short. Our first child, Oliver Thomas, was almost Alexander, because I liked Alex, but we ruled out Benjamin, because Ben Lee isn’t enough of a name.

For our daughter, we had only had one girl name we agreed on, Penelope Justine, and we still love it.

But it’s a girl, and that’s where we’re stuck.

We really don’t like frilly, feminine girl names. Even though I don’t think Rebecca is too girly, I’m not a fan of girl names that end with -a sounds. Other run into Lee. We both prefer Isabelle to Isabella, but Isabelle Lee sounds like “is a belly.” We talked about Evangeline, but I think it’s not great with Lee, either.

I keep Googling long girl names, and coming up with ideas like Andromeda and Henrietta. But that’s not us.

Right now, I think we just need some new ideas.

I hear you on the challenges with longer names. So often, we add on frills and flourishes when we lengthen. Antonia becomes Antonella. Emily picks up some syllables and is transformed into Emiliana.

But I wonder if the real problem is this: Oliver is three syllables. Penelope is four. But lots and lots of girl names come in at three syllables, feel reasonably tailored, and aren’t automatically shortened. Could it be that searching for long girl names keeps pushing you towards lists that focus on the elaborated Isabellina and Annabellas of the world.

So would you consider:

Alexandra – Despite the ‘a’ ending, Alexandra is a strong name boosted by the appeal of the letter x.

Genevieve – French names can sound a little on the fancy side, but Genevieve has a strong, distinctive sound.

Josephine – I think Penelope and Josephine were meant to be sisters!

Juliet – Yes, Juliet is a tragic romantic heroine. But the name feels modern and sparky.

Juniper – A nature name that’s every bit as fun to say as Penelope.

Scarlett – Yes, it’s just two syllables. But there’s a big sound to Scarlett, and I think it fits.

Veronica – As with Alexandra, Veronica was big a few decades earlier. But I think it sounds exactly right with Oliver and Penelope.

Violet – Like Scarlett, Violet is a little on the shorter side. But it’s a tailored name that’s on the right side of feminine.

My favorites with Oliver and Penelope are Josephine or maybe Juliet. But I like so many of these that I’m having a hard time narrowing it down.

Readers, what would you suggest for Oliver and Penelope’s sister? 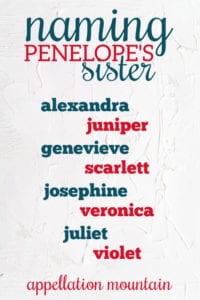