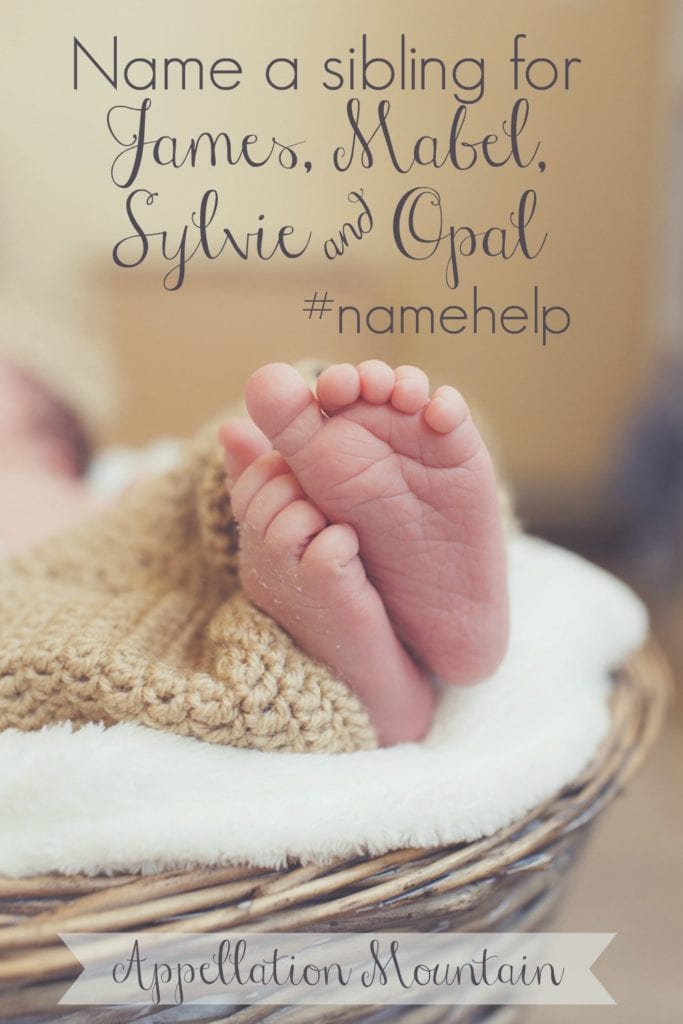 She’s here! Scroll to the bottom of the post for an update, and thanks to all for your help.

We thought we were done two babies ago, and ran out of good names along the way. We’re not finding out what it is, although I’d put a bet on a girl. Either way, the middle name will probably be Pioneer.

My husband has a son from a previous relationship, James Tiberius called James or Jemmy. It’s a mix of Star Trek references and family names.

We have three daughters together:

Mabel Prairie, called Bel – My full name is Mabel, after my grandmother, but I go exclusively by Mae. Prairie because I’ve always loved the idea of the wide open prairie and the freedom of the pioneers.

Sylvie Westward – Sylvie is the name I loved since childhood and always wanted to give to a daughter. If she’d been a boy, her name would have been Ward after a family member, but since we thought she was going to be our last (ha), my husband suggested Westward, like the pioneers pushing the boundaries of the frontiers, and I loved it.

Opal Wilder – Opal was suggested by a dear friend and we fell in love with it. Her middle name was going to be Laura (as in Little House on the Prairie), but Opal Laura runs together, so we went with her last name.

For this baby, I would like something with a strong “L” sound in it somewhere, but it’s not a deal breaker. Popularity isn’t a really big concern. Anything outside the Top Ten is probably fine, as long as it’s nickname-able. Sylvie frequently goes by Sylv and Opal by O, so if it doesn’t have an obvious nickname, we’ll find it, and if it does, we’ll probably use it. Not a big factor one way or the other.

If I were naming this baby in a vacuum, it would be either Elsa or Anders, but my husband has rejected both of them, much to my dismay.

We considered, but can’t use or can’t agree on Claire, Ilya, Jacinta, and Marin for a girl, and Urban, Christian, Jonathan, and Cole for a boy.

Let’s begin with girls’ names first. You’ve chosen some amazing names for your daughters – I’m swooning over the middles, and their connection to your heritage and family story.

Pearl – Pearl came to mind immediately. There’s the L sound, and it has the same vintage, underused vibe as Sylvie, Opal, and Mabel. Except. Pearl Pioneer is not great, and maybe Opal and Pearl are too straight outta the jewelry box?

Clarice – If Claire doesn’t work, I wonder if Clarice might be an option? It’s unexpected, and Clarice Pioneer is stunning.

Lou names – All of the Lou names feel like options. My first thought was Louise, but Lucille and Luella could make the list, too. Luella Pioneer charms me, and definitely emphasizes the L sound. Every one of the Lou names offers plenty of nickname potential, too.

Eloise – Elsa makes me think of Eloise. It ranks higher than your other daughters’ names in terms of popularity, but I think it has the right vibe.

Iris – Iris lacks an L, but feels like the right kind of sister name for Mabel, Sylvie, and Opal.

Daphne – I’d say the exact same things for Daphne as Iris; no L, but still worthy of consideration. One option that might pick up on some of Daphne’s sound and deliver an L? Delphine.

Paloma – Jacinta makes me think of Paloma. Like Pearl, maybe it makes Pioneer problematic as a middle. But it’s a gorgeous, relatively underused name.

Willa – Elsa and Ilya bring to mind Willa. Of course, Willa also makes me think Cather. The upside? She’s a great literary namesake known for her stories of frontier life. The downside? One of those novels was named O Pioneers! Once again, it might present a hiccup for your middle name pick.

Harriet – I’m not sure if Harriet is quite your style, but it nicknames to Hallie. (Okay, the conventional nickname is Hattie, but I’m pretty sure Hallie works, too.) Would that be enough L to satisfy?

Now, on to the boys:

Felix – Felix fits with your daughters’ names, and with his half-brother’s too. There’s a definite L sound, plus the great meaning – happy!

Miles – Like Silas, Miles also has a definite L. I think it goes well with James, as well as your daughters’ names.

Linus – I’m not sure why so many ‘s’ ending names also seem to have strong L sounds. I know you mentioned that more popular names are fine – and your boys’ list includes several that are Top 100. But Linus comes closer to Mabel, Sylvie, and Opal. Everyone instantly recognizes the name, but not a lot of people are using it.

Julian – Back to the familiar. Julian seems like an update to classic Jonathan, while still feeling like a traditional choice for a boy.

Louis – Since I mentioned the Lou names for girls, I feel like they belong here, too. Luke and Lucas might cross the popularity line for you – while neither is Top Ten, combined they would be more popular than Noah. But Louis, as well as Lucian, make great possibilities.

Overall, I find myself most drawn to Delphine and Clarice, if only because they work with Pioneer as a middle name. Otherwise, I think Paloma might give my vote.

On the boys’ side, I really like Felix and Julian – but if you decide that you want something even less common, Lucian and Linus seem like great possibilities. Overall, Julian Pioneer makes my favorite boys’ combination.

It’s a girl, and she’s named Iris Pioneer – a name that James spotted on this post. If it had been a boy, they’d settled on Keller Pioneer, thanks to a comment. Love, love, love the name, and especially the story of her brother being the one to discover it.