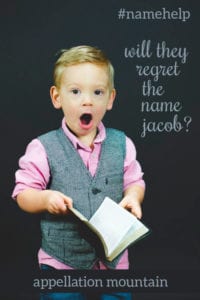 My husband and I are expecting our first child this spring. We agreed on a name pretty quickly: Jacob Michael. Michael is the name of the friend who introduced us, who we plan on asking to be Jacob’s godfather. And Jacob is a name we both love.

So why am I writing? My (younger, unmarried, no kids – yet) sister says it’s a boring name. That he’ll be one of five in his school. And that I’ll be one of those people regretting their baby’s name.

My husband says it’s fine with him, but it’s also fine if I want to change it.

We only have a few weeks left, and I could really use some advice.

How exciting to be expecting your first – congratulations!

And how lovely that you already have the perfect name chosen.

My advice: name your son Jacob Michael and never look back.

Since that would make for a very short post, let me spend a little more time telling you why I think you’ll never regret using the name you love.

You and your husband agree. This is no small thing.

Most people who write in are struggling to find a name that both parents can embrace. You’re lucky enough to be on the same page with this name!

Your sister says boring, but I say classic.

Are there lots of boys named Jacob? Yup.

But there are also lots of boys named William and Henry and James. Classic names appeal for lots of reasons. You’re certainly not alone in preferring something time-tested.

Name regret is about being talked out of YOUR favorite name.

There are lots of reasons parents report regretting their child’s name. But the biggie? Getting talked out of your favorite name for fear it’s too anything – popular, weird, plain, uncommon.

On a practical note, I’m guessing you might know fewer Jacobs than your sister’s worst-case scenario. We know lots of kids, from teenagers all the way down to newborns. And I know a grand total of three Jacobs, pretty much spread across that range. The most popular names just aren’t as saturated as they were even a generation ago.

So I would proceed with your plan and name your son Jacob Michael. Someday, your sister can choose names, as wild and extravagant as she likes.

Readers, what would you say to Holly?