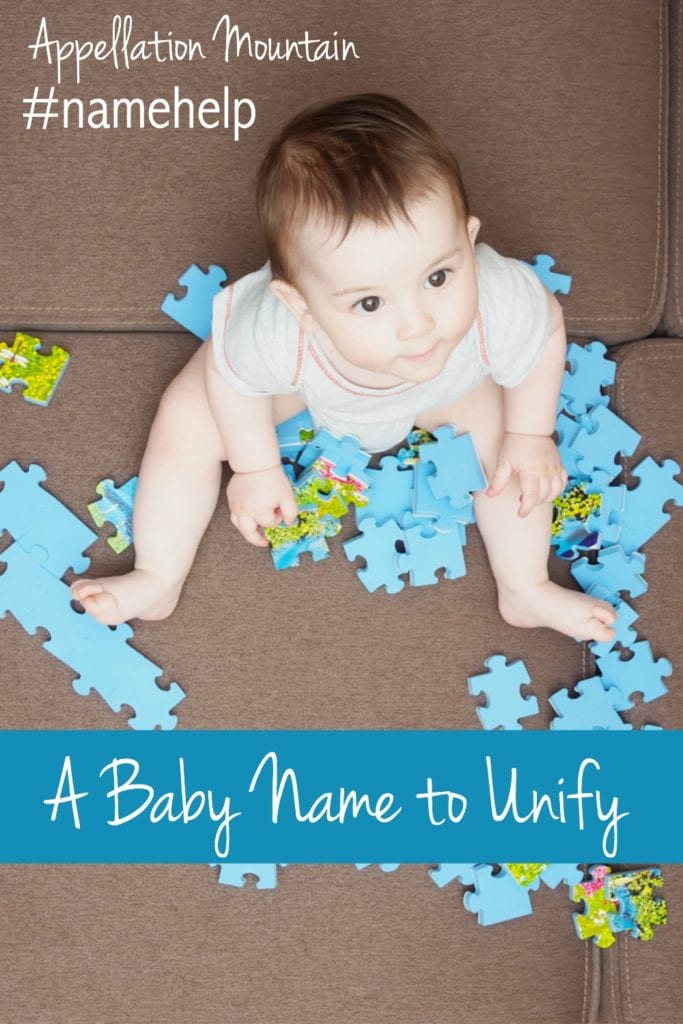 I’m having such a hard time finding a name that ties together the names of my two youngest and my stepson.

The names don’t seem to flow as is, considering my children each have six-letter word names that are somewhat uncommon – while my stepson has such a traditional, short name.

My children also have nicknames, which I love, while my stepson does not.

Finding a name that can tie these two styles together while still being somewhat uncommon, and of course meaningful, has proven to be difficult.

We don’t know if we’re having a boy or a girl. My stepson is Evan. My son is Jasper, called Jay, and my daughter is Meadow, called Rosie.

First, I think it’s lovely that you’re trying to find a unifying style for your blended family.

Stepfamilies are up against two things. The style differences often seem most glaring, but there’s also a time factor. You don’t mention Evan’s age, but I wouldn’t been surprised if he’s a tween – or nearly there. Jasper and Meadow sound likely to be the names of much younger children. Trends change and move on – and here are you are, trying to work with different naming styles and a decade’s difference or so (I’m guessing) in naming trends.

There’s nothing wrong with Mackenzie having a little half-sister called Amelia, but I think it’s nice to try to find a compatible style. After all, you’ll say the names together often.

Let’s start by focusing on what the names do have in common – and, to an outsider, it’s more than you might think!

Evan might not be a name that you would have ever chosen, but it’s definitely not as much of a mismatch as it could be.

As for nicknames, the good news is that you’re open to nicknames that aren’t obviously related to the given name. That means that any name can potentially be nicknamed, including Evan. (Though that may be sensitive territory!) After all, I’d probably call Meadow a nickname-proof name, and, at first glance, it is.

So let’s look for two syllable names, preferably word names. We’ll look for something that unifies all three names: Evan, Jasper, and Meadow. In terms of popularity, we’ll avoid the US Top 100. (Note: I’m writing this post just a few days before the new data is released, so it’s possible a few of these could be more than I expect!) And I like the idea of a distinctive, feature sound – though that’s a little harder to find.

A Baby Name to Unify: Boys

Forrest – You could also go for the more noun-like Forest, but the surnamey Forrest is much more common. (Even well before 1994’s Forrest Gump, a reference which will likely be lost on any child born in 2016.) Evan, Jasper, Meadow, and Forrest. It may be that Meadow and Forrest are too close – as if you’d have to name a future child Tundra or Field. But I think they work. Potential nicknames could be Ford, Rez, or Rhett.

August – August is an interesting word name, because it works on two levels. It has all the grandeur of the imperial Augustus, but also the simple appeal of a name that we associate with high summer. Evan, Jasper, Meadow, and August go together beautifully, and you could shorten August to Auggie or Gus. It also happens to have six letters, so I feel like it’s an obvious pick. And I like the way that Evan and August both start with a vowel.

Shepherd – Shepherd – also spelled Shepard – is an occupational surname name, just like Taylor and Carter. But it has a gentler vibe, and some families like the spiritual connotations of a shepherd and his flock. Again, Meadow and Shepherd might be too related, but it is a distinctive sound.

Silas – Silas isn’t exactly a noun name, but Silas does refer to the forest, via the Latin sylvan. It might be a smidge more common than you’d like – the name was just outside of the US Top 100 on the 2014 list. Still, I think that makes it a good middle-ground name between the obvious wordiness of Meadow and the more conventional Evan.

Axel – Okay, Axel is not a word name. Strictly speaking, it’s a Scandinavian version of the Biblical Absalom. But an axle is part of every car, truck, or wagon. And, in figure skating, the jump is called the Axel after Axel Paulsen, the Norwegian figure skater who first performed the jump. Axel has the distinctive ‘x’ sound, and again, starts with a vowel like Evan. Evan, Jasper, Meadow, and Axel.

A Baby Name to Unify: Girls

Hazel – Like Silas, Hazel is a little more popular than you might prefer. But I think it’s a great middle-of-the-road choice. As vintage as Jasper, with that great ‘z’ sound, but as much a part of all things green and growing as Meadow.

Clover – Or maybe Clover? It’s another six-letter choice, signifies luck and good fortune, and shortens nicely to Clo, Vee, and maybe even Chloe. It’s much less common than Hazel, not even ranking in the current Top 1000.

Ember – For something from the natural world, but just a little different, how about Ember? It’s an unconventional way to get to the nickname Emme, and it would give your newest child the same first initial as her older half-brother, which could be a nice way to unify the names.

Xanthe – I was hoping to find a name from the natural world that was exactly six letters, nickname-rich, and included the letter X. But I stopped looking as soon as I remembered Xanthe. It’s very rare in the US, but would fit with Zoe and Phoebe and Penelope. And while it’s not a nature name, it’s a Greek name meaning yellow. Evan, Jasper, Meadow, and Xanthe – I think it works!

Ivy – I’ve saved my favorite for last, and it’s one of those rare moments where I really think I’ve found the perfect name – even though it breaks a bunch of your rules! Ivy is another nature name, definitely a word name, and was outside of the US Top 100 in 2014. It’s close to Evan in sounds, but I don’t think it’s too close. And here’s why I think it is so perfect – Ivy is also IV, as in the number four. And Ivy is the fourth sibling. So if you don’t mind having a shorter name for your new arrival – and it happens to be a girl! – I love the idea of naming her Ivy.

I’ve tipped my hand with the girls’ list – I’m mad about Ivy! If not Ivy, Clover is a six-letter name that’s less common and might fit your criteria better.

For the boys, I think August feels like the best choice. It’s six letters, nickname-rich, and not too repetitive with either Jasper or Meadow – in fact, all four names would have distinct ending sounds.

Readers, I know you’ll have some amazing ideas! What would you suggest as a sibling name for Evan, Jasper, and Meadow?