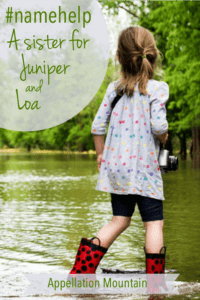 We are down to the wire and need to find a name for our second twin.

Our firstborn is named Juniper Caia. I absolutely love the name Juniper and have struggled to find any other names that I like as much.

We decided to name one twin Loa Jade and the more we say it the more we like it. But we’ve literally made ourselves crazy searching the internet for names for her sister.

I love the name Lilou Skye, but Lilou and Loa is a tongue twister. It seems others find Lilou to sound a bit cutesy too, which is not how it struck me at first and not the style I intend to pick. I also want to avoid -ley names as they sound a bit trendy to me.

We’re definitely leaning towards Maren and Audrey with Lilou potentially as a middle name, but are just not feeling convinced in any direction (and feel a bit guilty about not being in love with a
name). We considered a squish name, but really feel we need to avoid using Lilou because of the confusion.

I generally like offbeat names with a nature tie that I’ve never heard before, although I do really like the name Audrey.

Larkin, Skye, Lumi, Ivy, Cairn, Jade, Lupen, Laiken, Islan, Rowe all got a no from my husband.

I keep thinking I’ll find some hiking trail, mountain or waterfall with a beautiful name and use that (hasn’t happened yet!).

We like your style and would be forever grateful for any help you could give us!

Congratulations on your daughters!

I like the advice to name your twins as if you’re naming your next two children. But I also understand that twin names are spoken together a lot, especially when they’re young. So much as I love the name Lilou, I do think it’s Loa or Lilou – not both together for sisters, and especially not for twins.

And yet, I hesitate. Maren is a perfect sister for Juniper, with their tailored, feminine-but-not-frilly vibe. But is it a great match for Loa? I’m not convinced, and maybe that’s your hesitation, too.

If you’ve enjoyed having a daughter named Juniper, I wonder if Audrey might frustrate you? It’s such a lovely name, and I think it sounds even better with sisters Juniper and Loa. Except, only you can say if meeting other girls named Audrey – or hearing, “Oh, my sister/college roommate/next door neighbor/colleague just named her daughter Audrey!” – will lessen your affection for the name.

Let’s take a look at some other options:

Arbor – Harper makes me think of Arbor. It’s so much less common, has a lovely nature name tie, and I think it pairs well with Loa.

Bay – Loa is a mini name, complete in just three letters. That – and the interest in water-related names – made me think of Bay.

Calyx – Is this just way too out-there? Calyx comes from the sepals of a flower, or it could be short for Calixtus, which might share the same roots as the botanical term, or might mean beautiful. It sounds like Alex with a C, and it makes a daring name for a daughter. Loa and Calyx.

Cascata – I think this might be too elaborate for your style, and maybe too out-there for your husband. But Cascata is the Italian word for waterfall. (It’s cascada in Spanish.) Any chance that might work, either as a first or a middle?

Lake – Nature names are big on your list, and so is the letter L. So maybe Lake? Lake and Loa could be misheard, but I think the sounds are distinctive enough to work together. I know Laiken is a no, but maybe just Lake will appeal.

Landry – Speaking of L names, how ’bout Landry? Landry reminds me of Audrey in terms of sound, but is far more rare – it ranks in the 800s for boys and girls in the US right now. While Loa and Lilou are too close, I think Loa and Landry work together nicely – it’s just the right amount of repetition.

Plum – Plum refers to the fruit, of course. But a plum is also something good – the best. And so Plum works on multiple levels, plus it sounds great with Juniper and Loa.

Zora – Zora means dawn, which reminds me of Skye. (And I kind of love the sound of Zora Skye, especially with Loa Jade.) It also brings to mind Zoe from your husband’s list, as well as more conventional girl names, like Nora and Cora. But there’s no question the Z makes this zippy and unexpected. Zora does not currently rank in the US Top 1000, but it did back in the 1910s, so it has more history than you might guess.

If I can’t convince you to choose Maren Lilou, my vote goes to Zora Skye. It’s related to nature, but sounds like a more mainstream choice than it really is.

But I feel like I could add names to this list forever! So over to you readers – what would you name a sister for Juniper Caia and Loa Jade?