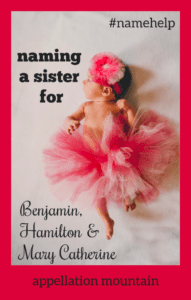 We are pregnant with #4! My kids are Benjamin, Hamilton, Mary Catherine, and their new little sister. Suggestions welcome!

Here’s what jumps out at me: your kids’ names are long. Maybe they’re called Benj or MC or Tony by friends and family, but the way you list your names gives them a certain kind of impact.

It seems unlikely that you’ll be naming this kiddo Bob.

Benjamin and Mary Catherine fall in the very traditional names camp. Hamilton boasts history galore, too, and yet it’s far more novel as a given name.

That makes me wonder if your new daughter’s name shouldn’t be a little more different, too.

I’m guessing you’d like something easy to pronounce, though, so that limits some of my possible suggestions. And I’m wondering if a double name might appeal? Of course, that might make you feel like a third daughter in the future would also need two names, and that can present a challenge.

Let’s dive into the names!

Anastasia – Long and elegant, Anastasia feels nearly traditional – in some languages, surely it is. It splits the difference between Hamilton and Mary.

Annalisa, Annalise, Anneliese – Annalise is the most popular spelling in the US, though you can argue that Annalisa makes more sense phonetically, and Anneliese is the German original. Regardless of spelling, I think it’s an appealing double name, similar to Mary Catherine, but different enough that you’re not trapped in a pattern.

Cordelia – Literary and with plenty of history, Cordelia sounds like a sister for Hamilton or Benjamin or Mary Catherine.

Genevieve – I originally thought about Gwendolyn, but if Benjamin is ever Ben, and Gwendolyn is ever Gwen … well, that might be adorable or confusing or maybe even both. So let’s look at Genevieve instead. I think it’s one of those great overlooked traditional names. It’s risen in use since the 1960s, but remains relatively uncommon, just inside the current Top 200.

Louisa, Anna Louise, or maybe Louisa Anne or Lucinda – Back to the double names idea … how about Anna Louise? Or maybe Lucinda?

Rosalie – Rose names make great choices. We all recognize them instantly, and most of us probably know a Rosie or three. But the great variety of Rose names makes all of them feel just a little different and special.

Theodora or Dorothea – I would suggest Theodore for Hamilton and Benjamin’s brother, so the feminine forms seem to belong on this list, too.

Veronica – One of my favorite quirky classics, Veronica is a New Testament name with a powerful meaning and an on-trend sound.

Overall, I’m most tempted by Veronica. I think it meets your criteria while still balancing out the differences in popularity between your older kids’ names. And there’s something quite timeless about Veronica that seems appropriate for your family.

Readers, what would you suggest to Bethany as a sister name for Benjamin, Hamilton and Mary Catherine?