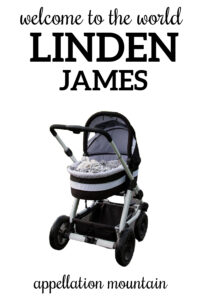 UPDATE: He’s here! Leisha writes: “Sorry I didn’t send an update sooner. We never did settle on a final name before I went into labor, but I had Linden near the top of my list. I think we might have used Emery if this baby was a girl, but somehow it just didn’t seem right for our nearly nine pound (!!) baby boy. So we came back to Linden James, and it suits him perfectly. I appreciate all the help and happy holidays to all AM readers!”

We have a four year old daughter named Cameron Mae. The name Cameron is in my husband’s family, but we didn’t know that until after she was born.

At the time, we were pretty sure we’d be one and done, but something changed for us both this past year. Now we’re expecting our second, and – for real this time – last child.

We didn’t find out gender in advance, and we were pretty sure we’d use Cameron no matter what. I like the idea of doing that again.

Our three-syllable last name starts with an H and ends with an -er, and it’s unusual, so Cameron is kind of a mouthful with it. We do call her Cammie and Cam a lot, though so far she’s only Cameron at school.

Other names on our list then were Avery, Emery, and Quinn. Good friends have used Avery, and I don’t like Quinn with Cameron, because it seems too short. When we were naming Cameron, I felt like there were lots of unisex names. But we’re struggling this time around.

Can you help us think of more names like Cameron?

May I suggest a possible reason for your challenge?

The first time around, all names were novel. Maybe you knew a few kids under twelve – neighbors and nieces and nephews and kids-of-friends. But unless you’re a teacher, odds are you really didn’t experience LOTS of kid names until you became a parent yourself.

Suddenly, the names that sounded fresh, distinctive, and yes, unisex, to our ears have all sorts of associations.

But often it’s just that the sounds feel familiar in a way they probably didn’t back in, oh, 2015 or so.

Happily, the style you seem drawn to – unisex surname names – is a deep pool of possibility. And even a relatively rare name might still sound familiar.

The trick is to find choices that are unisex in a way that they could be a brother or sister for Cameron. That means Top Ten favorites from either list – think Mason and Harper – are probably out. (Even though, in practice, there’s no reason they couldn’t be unisex.)

Let’s focus on names that really are used in similar numbers across gender lines.

Take the bell from Isabella, add a different ending, and you’ll have … the name of a hero from sci-fi series The 100. And since he’s a he, Bellamy is big for boys. But it’s easy to imagine this name succeeding for a daughter or a son, and like Cameron, it’s big on syllables.

A surname name from Elijah and company, Elliott is traditionally masculine. But it sounds enough like Ellie meets Juliette for it to succeed for girls, too.

Most of the Aiden names are fading, but Hayden would be my pick for an -ayden name likely to remain in steady use.

The Virginia home of the CIA, and a great surname possibility.

A tree name, Linden sounds like so many popular favorites – but it’s never cracked the US Top 1000.

Rowan, on the other hand, is popular for our daughters and our sons. But, like Linden, it’s also a tree name.

Another rarity, Winslow falls somewhere between William and Willow, Leo and Margot.

So … what goes best with Cameron?

I think the deciding factor might be which names offer a Cam-like option. Elliott, Winslow, and Linden seem like the stand-outs.

And yet, I want to add a word of caution here: if you find a name you love equally for a daughter and a son, that’s great! But it’s also possible that you’ll feel drawn to different names that, for hard-to-explain reasons, just feel better for Cam’s sister or brother – not both.

I add this because I would’ve pushed to name a sister Bellamy, but maybe not a brother. (The nickname Bel/Bell seems less wearable for a son.) And I think I might’ve pushed for Langley for a son, because Lang seems like such a cool short form … but not one I can picture as easily on a girl. (This, of course, is just my own specific set of preferences operating – yours will be completely different!)

Your style might be unisex … but it doesn’t guarantee you’ll feel drawn to the same names once your child is in your arms.

Readers, what would you name a sibling for Cameron?