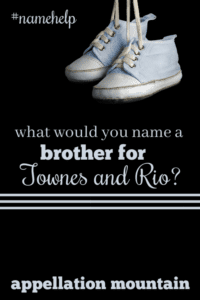 I’ve been following your site for years and was hoping you could help us with some ideas for naming baby boy number three!

My first two boys are Townes and Rio. For number three I like “word” names like Pace and Wilder but my husband likes Leon and Callahan. I’m not opposed to either of his choices but don’t feel like they really connect with the names of our first two.

Would love any advice or help!

Please read on for my reply, and please leave your thoughtful suggestions in the comments.

Here’s what I can’t stop thinking: I wouldn’t have suggested Rio as a brother name for Townes.

Not that don’t work together. On the contrary, they share an appealing familiar-but-unheard quality. There’s something eclectic, even edgy, about the choices.

That means – I think – that you’re in a very different position than many parents naming a third child. So often we feel like we’ve set a pattern with our first kiddo or two. And if you had boys named, say, Max and Sam, I’d have a tough time imagining a brother called Townes or Rio. But with Townes and Rio? Nearly anything feels possible. Except, of course, something as conventional as, well, Max or Sam.

As long as the name has that unexpected, makes-you-say-ooh quality? It will fit.

I’d put Pace at the top. It’s the rarest of the three, a name that no one else is using, but one that feels very wearable. Except I wonder if the shared ending sound with Townes is a little repetitive?

Wilder appeals, too. It sits in the middle, between buttoned-down Townes and outdoorsy Rio.

Leon feels nothing like Townes and Rio; it’s a vintage revival name. But that fits your non-pattern, too!

Callahan might be my personal favorite of the four. Again, I like that it feels very different from both Townes and Rio – except it would be a second surname name, so maybe it’s a little too close to Townes? For that reason alone, I’d put it four of four.

But since it doesn’t sound like you can agree on Pace, let’s start fresh. I’m going to suggest names that:

Bram – Like Townes and Rio, Bram is a short name with a lot of sound. It comes from Abraham, but while it’s very popular in parts of Europe, it’s rarely heard in the US.

Calix – An ancient name, from the Roman Callistus. The downside is that it might be misheard as Alex. But that also makes it feel slightly more accessible, I think.

Crispin – It makes me think apples, but Crispin was a third-century saint. Actor Crispin Glover makes it slightly more familiar; so does the enduring St. Crispin’s Day speech from Shakespeare’s Henry V, including the phrase “band of brothers.” (Here’s Kenneth Branagh delivering the lines in the 1999 movie version.)

Hale – Similar in sound to Pace, but with an ‘l’ instead of an ‘s’ sound at the end. I like Hale’s meaning, too – healthy and hardy.

Lorcan – A lot of names on your lists end with n. It’s a big category in boys’ names for the past generation or two, but that doesn’t mean every name is overexposed. Lorcan is Irish; it means little fierce one. You’ll hear it more in Ireland than the US, but it’s not unknown here.

Thane – Strictly speaking, Thane started out as a Scottish title. (In Macbeth, Lord Macduff is the Thane of Fife, and Macbeth himself is the Thane of Cawdor.) I think the sound has plenty of potential appeal, and it’s a rare choice for a child.

Vaughn – It’s been in the US Top 1000 since the year 1899, but most of the time, it feels pretty obscure – and yet instantly familiar,too.

Zane – Zane hovers near the Top 200 in the US right now, so at first glance, it doesn’t fit. Except I think it sounds exactly right with Townes and Rio.

Overall, I’m leaning towards Vaughn if you can’t agree on Pace. But I wonder if Hale, which is more of a word name, would be an even stronger choice?

I know our community will have some great suggestions, so let’s open it up: What would you name a brother for Townes and Rio?