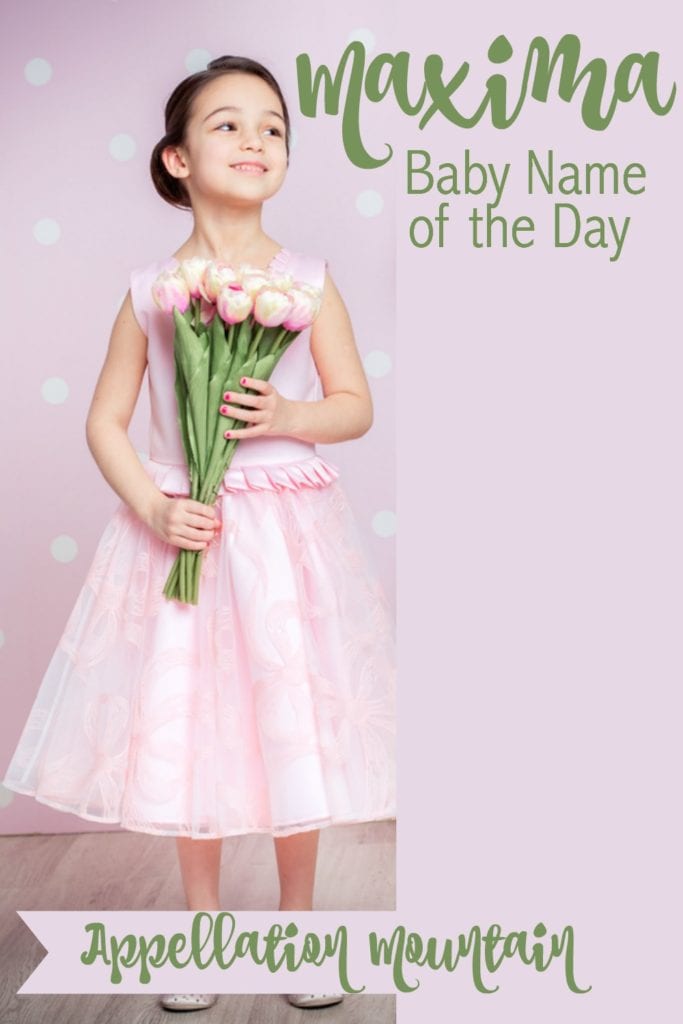 Maxima is a regal queen and a celebrity baby.

Like many a Max name, Maxima’s roots are Latin. It comes from a Roman family name with the meaning “the greatest.”

Other feminine Max-names include Maxine, Maximiliane, and Maximilienne. But the -ima ending has been around forever. There was a Roman slave turned evangelist who was martyred during a persecution, and is known as Saint Maxima. There’s a Saint Maximus, too.

Of course, there’s also a Nissan by the name – a mid-sized car first sold in the 1980s.

The current queen consort of the Netherlands was born in Argentina, the daughter of a privileged Argentine family with ties to the royal family of Portugal. But Máxima Zorreguieta Cerruti wasn’t royal by any means. She studied in the United States, and worked as a teacher and in finance. When she met her future husband, he introduced himself as just Alexander. The story goes that when he finally ‘fessed up, she didn’t believe him.

It doesn’t get anymore fairytale than that.

The couple married in 2002. They are the parents of three daughters: Catharina-Amalia, Princess of Orange, and Alexia and Ariane. Her husband, King Willem-Alexander, became king in 2013, when his mother, Queen Beatrix, abdicated in his favor.

The queen was named for her great-grandmother, and her youngest daughter’s full name is Ariane Wilhelmina Maxima Ines.

Comics gives us a second royal Maxima, from the planet Almerac. She came to Earth looking for a suitable mate – apparently Superman caught her eye, so she decided to visit Metropolis. While she wasn’t always unambiguously good, she did join the Justice League and fight on the side of right. The character first appeared in 1989.

Facebook founder and tech entrepreneur Mark Zuckerberg and Priscilla Chan met at Harvard, married shortly after she finished medical school, and announced the birth of their first child, a daughter, in 2015.

They initially called her just Max, suggesting that they’d joined the ranks of parents who chose to borrow from the boys, like Ryan Reynolds and Blake Lively’s James.

But we late learned that her full name is Maxima, a quirky, surprising pick for the couple. It’s more like mom’s name, Priscilla – traditional, but definitely under-used. They also announced that Max has a Chinese name, Chen Mingyu.

Maxima: By the Numbers

Given the wild popularity of Max names for boys, it could catch on. Maxine isn’t too far outside of the US Top 1000, and Maxwell, Maxie, and just plain Max are used for girls in small numbers.

The popularity of the Nissan model might give some parents pause, but this is clearly a case – as evidenced by the saint and the queen’s family tree – that the name was used for girls long before there was any such thing as a car.

If you’re after a traditional choice with a strong meaning and a boyish nickname, Maxima is one to consider.