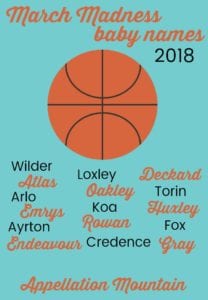 It’s the first Saturday in March, and that means it’s time for March Madness Baby Names!

2018 marks the eighth year of competition. (Seriously! Can you believe it?) The contest takes the most-viewed names at Appellation Mountain from the prior year, and lets them duke it out for the title of champion.

Because the most-viewed names at Appellation Mountain make for an eclectic set, the Opening Round is packed full of names you probably wouldn’t hear on a local playground. But the winning names tend to be favorites, and almost always rise in the rankings in the same year they claim the title.

Plenty of past contenders have returned in 2018. We saw Wilder, Huxley, Atlas, Torin, Emrys, Ayrton, and Koa in last year’s competition, too.

The Opening Round will narrow the sixteen favorite names to eight. We’ll then proceed to four, and finally two names, which will face off in the Final Round on March 24th.

Now that we’ve got all that out of the way, let’s vote!

The great outdoors battles against the book of maps.

A contest between two rarities: racing’s Ayrton and fiction’s Endeavour.

Which -ley do you love more?

A Fantastic Beasts character name or a literary surname?

Voting will remain open through Thursday, March 8th. Check back on Saturday, March 10th for the quarter finals round and see which of your favorites advance. Any guesses as to which name will win it all?