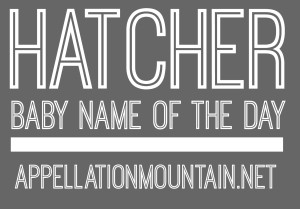 H surname names are big for girls, from Harper to Hadley to Harlow.  How ’bout this occupational surname pick for a son?

Thanks to Leslie for suggesting Hatcher as our Baby Name of the Day.

This name screams occupational surname name.  But what job did a Hatcher hold?

Based on English as we speak it today, I’d guess he collected eggs from chickens, or maybe hatched plans for … well, for something or other.

But no.  Because yet again, this name can’t be understood without delving into earlier forms of English.  In Old English, haecc meant gate. It became hacche in Middle English.

So a Hatcher was a gatekeeper, in the old school sense – manning an actual gate to an enclosed piece of land.  Toller and Latman carry similar meanings.

The surname has also made it to the map.  There’s a Hatcher Pass in Alaska, named after prospector Robert Hatcher.

But does the name have any history of use in the first spot?

Back in 1924, playwright Hatcher Hughes was awarded the Pulitzer Prize for his 1922 work Hell-Bent for Heaven. It became a movie in 1926.

I thought Hatcher might be his given name – he’s from North Carolina, Southern enough to be part of that family-surnames-as-first-names culture.  Alas, no.  The North Carolina encyclopedia gives his first name as Harvey.  Which is deliciously daffy, actually, and doesn’t necessarily hurt the case for Hatcher as a given name.  (Also, Hatcher had a brother called Cicero!)

Despite the relative rarity of Hatcher today, he feels like a promising possibility for a boy.  Ends in ‘r’ names are stylish for both genders, with names like Harper and Asher leaping up the popularity charts.

Rhyming name Thatcher was given to just two dozen boys back in 2000.  But fast forward to 2013, and 199 boys were named Thatcher.  Catcher has even seen some use in recent years, probably thanks to 2003 rom com Down with Love.

But the real rising stars of the ends-with-r trend are Top 100 favorites like Carter, Hunter, and Parker.  Right behind them are Asher, Sawyer, Ryker, and Tucker.

Hatcher would fit right in with those names, but for now he’s nearly unknown.  That might be an opportunity for parents after a stands-out, fits-in choice.

Do you think Hatcher will catch on?  Which do you like better – Thatcher, Hatcher, or Catcher?