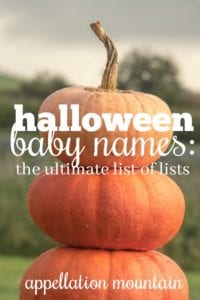 It’s the spookiest time of year, and these are the Halloween baby names that celebrate the season.

Seasonal names work for lots of reasons: they create an automatic shortlist, celebrate a favorite time of year, or just plain express your personal style. Halloween – and fall in general – happens to be my favorite time of the year. While I think names like Autumn are far more mainstream, some amazing choices lean a little bit darker. But that doesn’t make them any less wearable – at least some of them.

Trying to decide if a name is too much? It’s not exactly the same question, but Can I Use This Bad Guy Name for My Baby? might help.

This list of lists rounds up the best of the Halloween baby names lists you might find anywhere online – including Appellation Mountain.

Halloween Baby Names: Things That Go Bump in the Night …

Halloween Baby Names: Some of the Spookiest …

What are your favorite Halloween baby names? Would you consider any of the names from this list of lists?