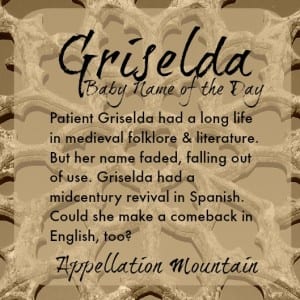 She’s patient. But how long will we wait for her name to feel stylish once more?

Thanks to Kristin for suggesting Griselda as our Baby Name of the Day.

Sometime in the middle of the 1980s, I first heard this song on a rerun of The Monkees. They had a quirky song called “Auntie Grizelda.” Not one of their hits, but memorable: No bird of grace ever lit on Auntie Grizelda.

It struck me as an oddity, something like Drizella, the name Disney gave to one of Cinderella’s wicked stepsisters, Surely not meant for any real person, right?

Actually, I was wrong.

Griselda isn’t coined from unattractive words like grisly and gristle. Instead, Griselda comes from the Germanic elements gris – grey – and that familiar hild – battle.

Folklore gives us Patient Griselda. A poor but virtuous maiden, Griselda marries a nobleman. Her new husband puts her to all sorts of heartless and horrific tests, but Griselda is steadfast. She obeys her husband without complaint.

The story was told by Petrarch, then in Chaucer’s Canterbury Tales and Boccaccio’s The Decameron. John Phillip called her Meeke Grissill in a 1565 play.

At least four operas were based on the story, including Vivaldi’s 1735 work. There have been late twentieth and early twenty-first century updates of the traditional story, too.

Anthony Trollope used the name, but his Griselda wasn’t based on the patient character.

There were probably some Griseldas in the Middle Ages, and a handful beyond then.

Heiress Griselda Steevens inherited a fortune, and used it to build a hospital in Dublin in the 1700s. Despite her wealth and good works, Miss Steevens was something of a recluse, which led to wild rumors that she was born with the face of a pig.

In late seventeenth and early eighteenth century Scotland, Lady Grizel Baillie was known for the songs she composed. Lady Baillie passed down her unusual name to a daughter. A century later, her descendant and namesake, Lady Grissell Baillie, became the first female deaconess in the Church of Scotland.

The name slowly faded into obscurity.

In recent years, Griselda seems to have been far more popular in Spanish than in English.

There’s Mexican poet and politician Griselda Alvarez. In 1979, Alvarez was elected governor of Colima – the first woman to hold the post of governor in Mexico. She spent six years in office, but came to politics after a long career as a writer, beginning in the 1950s.

More recently, there’s Argentine actress Griselda Siciliani, and a handful of other women.

I suspect that’s the influence of Spanish-speaking Americans.

And while the name is fading once more, there were still 51 girls given the name in 2013.

I’ve heard it described as a “witch name.” That might be because of Griselda’s sound, but it was also used as a character name in The Worst Witch. And more recently, a very minor Harry Potter character was named Griselda Marchbanks.

Do you think Griselda has a chance of a comeback in 2015?