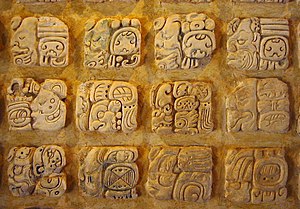 Did you honeymoon in Cozumel?  If so, this might just be the perfect name for a long-awaited daughter.

Thanks to Kelleita for suggesting Itzel as our Baby Name of the Day.

Most assume that Itzel’s roots are Mayan, but before we go too far into that story, it is worth noting that there’s a second explanation for Itzel. At some point, Itzel was also used as a diminutive for Isaac, and so surfaces as a surname from time to time.

Choose Itzel for a child today, and most will assume you’ve just named your daughter.  Pronunced eet SEHL, she’s reminiscent of the Spanish verison of Isabella – ees sa BELL ah.

Itzel probably derives from the Maya goddess Ix Chel – a jaguar goddess, charged with fertility and rain, midwifery, and medicine.  She’s something of a crone, a wise woman, often depicted sporting bones and claws.

Many baby name guides confidently list Itzel’s meaning as “rainbow” or “rainbow lady.”  Ix Chel was responsible for rains and floods, and chel is linked to rainbow.  It was in use in the 1500s, but we don’t have a clear sense of the name’s evolution, and other explanations are possible.

What’s certain is her significance: Maya women hoping for a child would make a pilgrimage to Ix Chel’s sanctuary.

Given the sufferings of the Maya people, it is tempting to see Itzel as a name that signifies remembrance and survival, but that might be a stretch.  What’s certain is that Itzel was rediscovered sometime in the twentieth century, first by Mexican parents.  In 1993, she entered the US Top 1000 at #868, climbing to #512 the following year.  She’s risen and fallen, but stands today at a relatively common #397.

It’s the kind of story that suggests a telenovela is at work, and indeed, there have been Itzels all over the small screen of the Spanish-speaking world.  But unlike many popular names, there’s no single use that tracks with Itzel’s rise.  Instead, there’s a scattering of minor figures, all too late to be the cause of Itzel’s rise.  The same is true for the handful of pageant contestants answering to Itzel in the early 2000s.

One possible reference is Mexican-American author Sandra Cisneros’ Woman Hollering Creek, a 1991 short story collection.  In “One Holy Night,” Ixchel is a tweenaged immigrant living in Chicago, who falls for a much older man, a conniving figure who insists he’s a Mayan prince, when he’s actually a murderous fiend.

The timing is right, but I suspect Cisneros was borrowing a name already in use, not introducing a new option.  Along with Ytzel, Itzel is heard, mostly among Latino families in the US.

Itzel reminds me of Saoirse – it is an authentic option for Spanish-speaking parents today, but if your family has been in the US for several generations, there probably aren’t any Itzels on your family tree.  And yet it almost only works if you’re not too far removed from your roots.

Properly pronounced, Itzel is a pretty, intriguing choice for a daughter, but she may not be the most portable option.