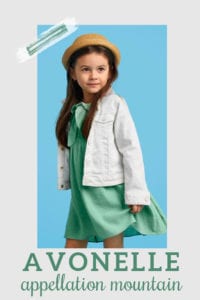 The baby name Avonelle connects to a National Park and a popular naming style, but might the origins be literary?

Thanks to Joseph for suggesting one from his family tree as our Baby Name of the Day.

Around the turn of the twentieth century, both Avonelle and Avanelle appear in the US Social Security data.

It may simply reflect our love of -elle names, which was as strong a century ago as it is today.

Consider that, in 1899, Mabel and Hazel ranked in the US Top 100. So did Ella, Stella, and Della, along with Nellie. And while Ava was rare, Eva and Evelyn were also Top 100 favorites.

By 1935, around peak usage for Avonelle, some -el/-ella/-elle names were fading, but others were catching on. Rochelle, Janelle, and Rosella were up-and-comers circa 1935.

One of the most enduring uses of Avonelle comes from long-serving Yosemite Park Ranger Otto M. Brown. He named Avonelle Lake after his daughter. His wife, Ardeth, inspired the name of a second lake. We know that Brown was on duty when Eleanor Roosevelt visited the park in 1934, and we know that naming features after living persons was officially discouraged after 1906.

We also know that Brown retired in 1961, after 33 years of service. It seems likely that his Avonelle was part of the trendlet, not some surprising driver of it.

But speaking of place names, here’s one that puts the name squarely in the nineteenth century: Avenel, New Jersey.

The community was established in 1901; it was named for the daughter of Captain Demarest. The Demarest family was a driving force in the development of the state. French Huguenots David and Marie Des Marets arrived in the New World in 1663; fifteen years later, they’d settled in New Jersey. He owned a prosperous mill. By the time of his death in 1693, he had 26 grandchildren.

It stands to reason that, even two hundred years later, the Avenel Demarest who inspired the New Jersey place name might have been descended from that same family of French immigrants.

It appears that Avenel comes from the Latin word for oats – avena. Oats are grown in France, so this seems like a logical place name and surname.

Sure enough, there’s Octeville-l’Avenel on the map in Normandy even today.

By the twelfth century, Anglo-Norman magnate had been given land in southern Scotland.

So the name appears to be French in origin, and came to England with the Normans and maybe to the New World with the Des Marets family.

Or was there something else that explained the Demarest daughter’s unusual name? And could that connect us to the baby name Avonelle.

Wildly popular early eighteenth century author Sir Walter Scott penned The Monastery in 1820. It’s set in the Scottish borderlands in the sixteenth century; one of the central figures is Mary Avenel. There’s also an apparition, the White Lady of Avenel.

Scott wasn’t just borrowing an appropriately aristocratic family name for his character, though.

In French folklore, dames blanches are female spirits. (They’re found in other European cultures, too, with similar names.) They’re not exactly benevolent.

The Monastery was not one of Sir Walter Scott’s better known novels, but something of the story endured in the popular imagination.

In 1825, French composer François-Adrien Boieldieu debuted an opera titled La dame blanche, based on several of Scott’s works, including The Monastery.

We know that several places were named for Avenel, including a small town in Victoria, Australia (settled circa 1858); several historic homes, including one in Maryland and another in Virginia. (The latter has its own White Lady, said to be a widow still waiting for husband to return from the Civil War.)

It looks like Avenel almost certainly inspired the baby name Avonelle – and Avanelle, and perhaps a few other spellings.

One other reason to suspect the name claims literary roots? If we return to park ranger Otto Brown, his other daughter’s name, Ardath, lines up with an 1899 novel by Marie Corelli titled Ardeth.

Overall, it seems likely that the baby name Avonelle owes its start to the French place name and surname, thanks to Sir Walter Scott’s novel. But it’s clearly evolved since then. With Ava and Annabelle in favor now, it’s easy to imagine this name wearing well today.

What do you think of the baby name Avonelle? Would you consider it for a daughter?