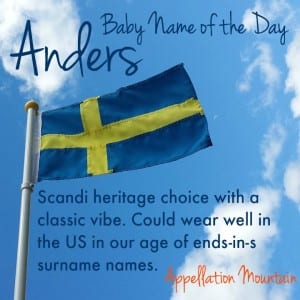 Today’s name is a spin on classic Andrew.

Thanks to Maura for suggesting Anders as our Baby Name of the Day.

Anders: From Sweden with Love

The original form of this name is Andreas, and the original Andreas was a New Testament apostle, among the first to join Jesus. It may not have been his real name, because Andreas is Greek, rather than Hebrew or Aramaic like the other apostles.

With such a major Biblical figure answering to the name, no surprise forms of Andreas are common throughout the Western world.

Andreas became Anders in Swedish, as well as Norwegian and Danish.

I tend to associate the name with Sweden because of:

Today the name is trending downwards throughout Scandinavia. That could be due to Anders Breivik, the extremist behind the  terrorist attacks in Oslo in 2011 – though the downward trend seems to have started before then.

Andrew has been wildly popular in the US, peaking in the 1980s. It’s not as evergreen as William or Joseph, but Andrew feels like a classic.

Andrea is generally the feminine form in English – though it is masculine in Italian – and has been nearly as popular as Andrew.

The French Andre has had a good run, too.

But not Anders – at least not yet.

If Americans embrace the name, it could be less because of Anders’ Scandi roots, and more because of the name’s surname style. Just like Mr. Starbuck, chances are that any Anders you meet in the US is Mr. Anders, not Anders LastName.

One of the Apollo 8 astronauts was William Anders. Apollo 8 was the first manned mission to the moon. All three of the astronauts – Anders, Borman, and Lovell – have lunar craters named in honor of their achievement.

But Apollo 8 isn’t a household name, either, so that can’t explain why the name started to rise in the 1980s.

My best guess? It was just a little bit different than the enduring Andrew. And that’s still why we’re warming to the name, decades later.

If you’re after a name that’s just a little bit different, but doesn’t stray too far from traditional choices for boys, Anders is definitely one to consider.

What do you think of Anders? Is a fresh update to Andrew, or do you prefer another form of the name?