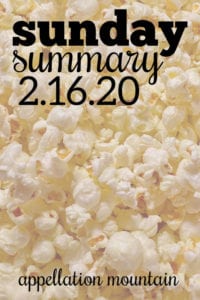 Did you watch the Academy Awards last weekend? I missed it, but woke up the next morning to hear that Parasite surprised everyone by taking home the Oscar for Best Picture. The South Korean dark comedy/thriller is the first non-English language movie to earn the distinction.

There’s lots of talk about diversity during awards season. Performers and the public alike voice their frustration. Did you see the cape Natalie Portman wore, embroidered with the names of female directors overlooked by the process? Amazing. No question it’s a serious matter.

And yet … Parasite won.

We stumble, we trip, we flail. It feels like we’re standing still at best. But somehow, the world gets bigger. As Martin Luther King famously said, “The arc of the moral universe is long, but it bends toward justice.”

What does all of this have to do with naming children?

As the world changes, so do the names we choose.

I say bring it on.

Putting my soapbox away now.

The Axel-Xela-Lexa-Xeal family is expecting again! If you’ve been following all things baby naming for a while, you’ll recognize Gwenny Blanckaert’s distinctive naming style for her nine children. She and partner Marino named their first son Alex after a family member. They’ve since welcomed nine more children, all named with the exact same four letters: Axel, Xela, Lexa, Xael, Xeal, Exla, Leax, and Xale. Time to find a tenth name using those same four letters …

A long list of mini names, either two- or three-letters is up at Onomastics Outside the Box. I find many of these names richly fascinating despite – or maybe because of? – their brevity.

The name of the week at British Baby Names is … Asa. Perfect timing!

Duana describes the process of finding names as “alchemy and magic and benevolent witchcraft” … love this! She also shared a bunch of updates, which are very worth reading.

This is kind of funny (though obviously I disagree) … Rich people should stop giving their kids long-a$$ names. As for the part about name-signaling? There’s truth to it. But it’s not fixed and rigid. Lots of ordinary, non-wildly privileged kiddos have multiple middles these days. And that means the signal? Changes. See the note about Gladys and Herman above.

Speaking of things that change … we no longer live in an age when cousins routinely share names. Plus, the internet. That means stories like this one aren’t going away.

That’s all for now. Thank you for reading, and have a great week! 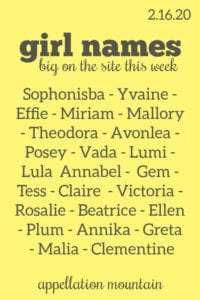 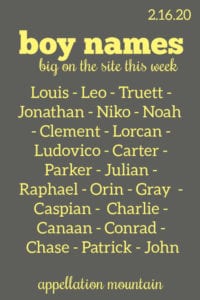