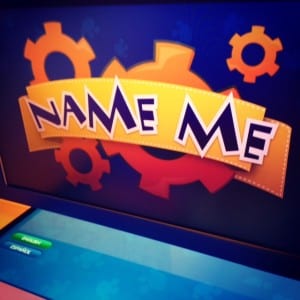 At the Build a Bear workshop in the Mall at Annapolis, making a new BFF for my daughter.

Towards the end of the process – after the fluff has been pumped into the skin (I called it a carcass and was gently corrected by the nice BaB attendant), after the creature has been bathed and outfitted, there’s the best part: The Name Me Station.

My daughter managed to name her stuffed cat Meowy Kitty in about three minutes, so I had to move on.

I love what Jennie and Rebecca said on Facebook about researching and carefully considering the names they gave to their dolls and stuffed animals. I agree – a lot of us were That Kid, and grew up to be parents intensely interested in what to name our children.