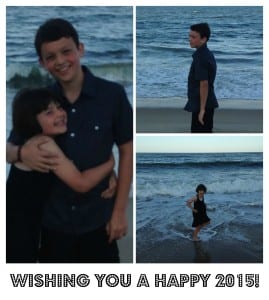 I think New Year’s Day is my favorite holiday.  All of that possibility.  Like many of us, I tend to arrive at the last day of the old year wiped out from all the merriment and travel, with a little bit of a sugar cookie hangover.

But on New Year’s Day?  It all starts over.  And this is a joyful thing.

It’s been a while since Alex and Clio made an appearance on the blog, I think – so here they are.  We’re all wishing you glad tidings and good things in the coming year.

Speaking of good things, I’m so pleased to announce that we’ve helped name another baby!  Clover Mildred is here.  Yes, it’s a very different direction than the family was originally considering – but sometimes the right choice for a family isn’t the one that seems like an obvious choice.  It’s kind of lovely when we set out all sorts of rules and then realize that the best name is actually one that doesn’t fit!