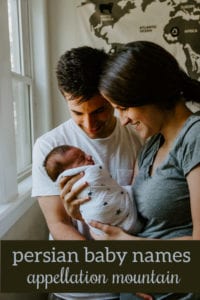 From an American perspective, Persian baby names range from the vaguely familiar to the completely fresh.

Thanks to Nicole for suggesting a look at this language, and cross-cultural name choices that adapt well to English.

First, let’s be clear: I’m writing as a complete outsider. I’ve never been to Iran, Afghanistan, Tajikistan, or any other place a Persian language is spoken. And my circle of family and friends is lacking in this regard, too.

So most of this information comes from a handful of sources. Well, that, and noting many of these names over the years – often because they’re coincidentally similar to other English names, or because they’ve surfaced in popularity data.

There’s no country called Persia on the current map. And there are at least three distinct varieties spoken: Iranian Persian, Tajiki, and Dari. They don’t even share a single alphabet. Tajiki uses an alphabet related to Cyrillic, while the other varieties use Persian script, which is closer to Arabic.

This makes this a little challenging. We can talk about Swedish names with confidence. It’s a relatively well-defined set of names, used by native speakers of a single language, written in a standard alphabet. But the variation in Persian names will be far greater.

Nicole suggested this post because her husband’s family is from Tajikistan, and their firstborn is named Komron. While I can find plenty of examples of men with the name – a footballer, doctors and lawyers and more – it’s hard to find children born in the US with the name.

Except transliteration matters. Going from one alphabet to another isn’t necessarily standard, and there’s no reason to expect that Tajik and Dari transliterations will be identical.

Because spelled Kamran or Kamron – both alternate transliterations of the name – and the name appears in the US popularity data from the 1960s onward. Some of that reflects the rise of Scottish surname Cameron. But it may also reflect early waves of Iranian immigration.

This list primarily reflects names supplied by Nicole, as well as those appearing at Behind the Name under Persian and Tajik.

While I’m less certain of their accuracy, I also checked this list for Tajik girl names, as well as this one for Tajik boy names.

Not surprisingly, Arabic influences many of the names as they’re used by parents today. Depending on your perspective, some of these might not feel like Persian baby names – even if they’re used as such.

Aamilah looks like an import, either borrowed from an Arabic name meaning worker, or possibly one meaning hope.

This one has me stumped! While Anira – and the masculine Anir – appear in various databases, the meaning and origin are obscure.

Anisa means friendly. It strikes a balance between standing out and fitting in, too. Unlike Ava or Dana, it’s clearly a heritage choice, but one easily pronounced and spelled in English, too.

While it’s close to the English Annora – a cousin to Honor and Honora – Anora means pomegranate. It’s also spelled Anara.

We love Aria for the musical meaning, the lyrical sound, and a host of pop culture references, from Pretty Little Liars to Game of Thrones. (The latter boosted this spelling.) But Arya is also a culture-spanning choice, meaning noble.

Also spelled Awa, this name means voice. Since it’s also a Top Ten pick in the US, Ava would fit right in – maybe too much, if you’re hoping for a heritage choice.

Another name with multiple online listings, Avina is commonly considered Latin. But I found it listed here with the Persian meaning “pure like water.”

Baran means rain. It looks like “baron” or “barren,” but I assume the pronunciation is closer to BAH ran, not unlike Iran.

Dana peaked in the US around 1970, the age of Danielle. Several other languages share the name, though, and in Persian, Dana means wise. It’s also pronounced differently, with the first ‘a’ sounding like the ‘a’ in cat, and emphasis on the first syllable: DA na, not DAY na.

Many similar names are heard, in English and across the world, with various meanings attached. But in Persian, Farrin means glorified.

Internationally known thanks to the supermodel, Iman means faith. While it’s often listed as unisex, it appears to be more popular for boys in the Persian community.

Leila is among the most reliable cross-cultural names, familiar to English speakers thanks to Lord Byron and Eric Clapton.

I’ve only found one reference to Jonona, which lists it as an Uzbek name meaning beloved. While Uzbek isn’t closely related to Tajik, Persian, or Dari, the countries border each other, and presumably names are routinely traded.

Mehri is short for Mehrangiz, a traditional Persian name meaning affectionate. It might also be spelled Mehry. This feels like a natural culture-spanning choice, clearly different from classic Mary and Meredith, but easily accessible to English speakers.

Another name that spans several cultures, Mina means enamel or azure in Persian. A number of notable Iranian women have answered to the name. The ‘i’ is pronounced like an ‘ee’ and, with Mila so popular, Mina feels like a logical successor.

It looks like Paris-with-an-a, but Parisa is an Persian name meaning fairy. They feature in Persian fairy tales, like this one.

Roshan means light in Persian. If you’re a fan of the Ice Age series, it might sound familiar. In the first movie, Manny the mammoth and Sid the sloth rescue a human child and return him to his family. The child’s name is Roshan, but Manny and Sid don’t know that … so it’s pretty easy to miss.

A Persian name with Arabic roots, it can mean serenity or pure.

Sahar means dawn, which puts it in the company of names like Zora and Aurora. It’s not related to Sahara which comes from a different word, simply meaning dessert.

This name has two equally intriguing meaning: companion in evening talk, and the chameli flower. Never heard of a chameli? It’s jasmine. Samira currently ranks in the US Top 1000, making it one of the more popular names on this list.

You may know that Esther means star in Persian. Setare or Setareh is the original form.

While Shirin may be based on a historical figure, she’s most famous as a hero in Persian literature, an example of bravery and faithfulness. It means sweet, and it’s pronounced Shireen – which brings to mind the tragic Game of Thrones character.

Made famous by Princess Soraya, the queen consort of the last Shah of Iran, Soraya refers to the Pleiades. While their marriage ended, it’s believed the Shah’s love for her did not. Some years after their divorce, he created the Order of the Pleiades, almost certainly referring to his former wife. It’s been used for girls in the US since Princess Soraya became internationally known in the 1950s.

A princess of Jordan answers to this name, also spelled Sumayya. It’s likely Arabic in origin, meaning “high above.”

Vida might mean life – it’s the Spanish word, from the Latin vita. But in Persian, it means visible.

Zahra means briliant or bright, though various forms of the name are heard throughout the Middle East and beyond.

Familiar to anyone who has ever seen Aladdin or followed boxing, Ali means lofty. It’s widely used throughout the Middle East, but feels accessible in the West.

Take Ali and combine it with sher – lion. It’s quite rare, but feels promising, only a few steps removed from Alexander. (Or possibly Alistair.)

A short, strong name with a virtuous meaning: truthful.

Arman means wish or hope, and sounds a little bit like Armand – the French form of Herman – though there’s no relation.

One of several Persian baby names that appears on both the boys’ and girls’ lists.

Comedian Aziz Ansari makes this name broadly familiar. He’s from a Tamil Muslim family originally from India, but this Arabic names appears on lists of Persian baby names, too, with a compelling meaning: powerful.

Behnam means “of good name,” as in reputation; an honorable person. It might fit right in with so many Ben names for boys, but Behnam is pronounced more like beh NAWM.

A great many name possibilities come from the Old Testament. Esmail is the Persian form of Ishmael – God will hear.

Hasan means handsome, and it sounds like it, too.

The Mughal emperor Shah Jahan built the Taj Mahal in the seventeenth century; it’s a mausoleum for his late wife, and his resting place, too. The name means world.

Javed means eternal. It looks like jah ved, but the ‘e’ sounds like an ‘ee’ – jah veed.

Mentioned above, Kamran might owe some of its crossover potential to similarity to Cameron. But it’s a Persian name meaning prosperous.

In Persian, Kian means foundation or king; it may be heard in compound names like Kianoush, too.

An accessible name with an upbeat meaning: good news.

A virtue name meaning just, Nima seems to be used only for boys in Persian, but may be unisex in Arabic.

Rahim shares the long ‘e’ sound of Karim and Navid. It also has a great meaning: compassionate.

Another name that appears on the girls’ list, too, Roshan means light.

All-American Sam, as in Uncle, is also the name of the hero in the Shahnameh, an epic poem from tenth century Persia. It might also be spelled Saam.

Samir easily shortens to Sam, but this name is related to Samara, and shares the meaning companion in evening talk.

You might think this name means king – and it almost, sort-of, kind-of does. It means majestic, and refers to a falcon.

Taron, Torin, Tiran … lots of boy names fit this general pattern and sound. In this case, Tiran seems to come from Tir, an ancient god.

Zahir is gaining in use, probably thanks in part to our preference for the letter Z. It means supporter.

Would you consider Persian baby names? And if you’re a native speaker/of Persian descent and can add details or additional names, please comment below!