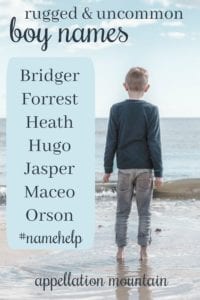 Why on earth are boys names so hard?! My husband and I are expecting our second boy in July, and we’re convinced we will never find a name for him. Never ever. Can you help, pretty please?

Our firstborn’s name is August Gracia Pline. Pline is my husband’s last name, Gracia is my mother’s maiden name – a Portuguese last name that died with my grandfather, but lives on in my (changed) last name and my mom and brother’s middle names. We struggled with August’s name for quite some time as well, but once we landed on it, we loved it. He goes by August mostly, with others starting to call him Gus.

Enter boy-o two. He will also have dad’s last name, and we’re keen on Keith as his middle name – this is my brother and paternal grandfather’s first name, and my dad’s middle name.

Our list of likes isn’t terribly long, and ranges from full on vetoes from the other, to “meh, I like the way it sounds, but don’t know if we could name a kid that…”

• Monty (husband thinks it should be a nickname, not a full name)
• Anderson (family name; but I do not like the nickname options)
• Milo (too popular, though I really do love it)

• Frederick (current top spot, but essentially only because we need something to have a top spot; I love Fritz and Red as nicknames)
• Rocco (husband vetoed)
• Fritz
• Enzo
• Stellan
• Ozzy

We want to avoid the Top 100 names, and are looking for something unique-without-being-too-unique. Names that invoke the outdoors or ruggedness or strength are a plus. (We think August fits both of these categories nicely.)

My husband is Luke, and Luna and Oskar are our dogs, so those names (and sounds) are taken.

I feel like I’ve scoured and just can’t find the right fit. I’m up for suggestions or being talked into a choice above with great rationale!

Congratulations on your second son! I’m convinced naming boys is just a little bit harder than naming girls – though I can never put my finger on exactly why.

That’s for another day, though!

It seems like you’re stuck on the formal name/nickname challenge. You’d use Frederick, but only if you could call him Fritz. Or you’d name him Anderson, except you don’t want an Andy. I suspect your sweet spot is names that don’t require or invite a nickname. Yes, August can be Augie and Gus. But plenty of Augusts are just plain August.

Let’s look past the longer names with uncertain nicknames, like Frederick and Anderson, as well as the short forms that feel like they need a formal name, like Ozzy and Monty. Because you might get to agreement if you could find a name that feels rugged, uncommon – and relatively straightforward. Just like August.<

Bridger – How do you feel about boys’ names ending with -r? You don’t have any on your current list, but I think they work well. Bridger has enjoyed some popularity in the Mountain West, probably because scout and wilderness guide Jim Bridger looms large in that part of the country. (And plenty of places are named in his honor.) It’s currently just inside the US Top 1000; it’s been in the Top 100 in a handful of states, including Wyoming and Montana. If Bridger feels too long but you like the sound, Ridge might be another option.

Forrest – We had a spirited discussion on the Facebook page last week about Forrest. On the one hand, it’s a great nature name/surname choice with lots of appeal. On the other hand, there’s Forrest Gump – who was named after Nathan Bedford Forrest, a Civil War General on the wrong side of history. (Really on the wrong side. He was a founding member of the Ku Klux Klan.) The good news? Dozens upon dozens of others bear the name, both as a first and a last, and many of them have made the world a better place. You might also spell it Forest, as in Whitaker, which makes it more clearly a nature name.

Heath – Okay, I know that you couldn’t possibly name a son Heath Keith. But  is there any possibility you’d reconsider Keith as the middle? I say this because Heath fits your description so nicely. It’s a subtle nature name with a rugged, outdoorsy vibe. It’s familiar, but definitely not common. I like the idea of Heath Anderson.

Hugo – Milo and Enzo end with ‘o’ and so I wonder if you’d like Hugo. I almost suggested Arlo, but it’s just a few paces behind Milo in terms of popularity. The thing about Hugo is that it’s plenty traditional – just like August – but feels impeccably modern. Again, that’s true of August, too.

Jasper – I can’t resist suggesting Jasper. A polish nature name that’s just coming back into favor, Jasper has style to spare. Though if you know a lot of kids called Milo, maybe Jasper is popular in your circles, too?

Maceo – I’ll add one more ‘o’ ender: Maceo. Odds are it’s cousin to Matteo, via nineteenth century Cuban revolutionary Maceo Grajales, and a handful of notable American performers. It’s a little like the chart-topping Mason, or maybe Mace, as in Windu, Samuel L. Jackson’s Jedi character from the earlier Star Wars movies. As boys’ names go, it’s quite rare – just 91 boys were given the name in 2016, and that’s a new high.

Orson – Ozzy, Monty, and Fritz all sound vintage to my ear. I wonder if something like Orson would appeal? It means bear cub, from the French word ors. It’s never been common, but we all know it, thanks to the legendary Orson Welles.

Overall, much as I like Frederick-called-Fritz, I keep coming back to Hugo. It just plain sounds like a brother for August, one that strikes the same traditional-but-unexpected, rugged-but-not-too-wild note. But when I factor in the middle name Keith, I find myself drawn to Orson: Orson Keith. I think the initials OK are a bonus, but obviously, that’s very much a personal preference.

Readers, what would you suggest to Veronica for a second son’s name?