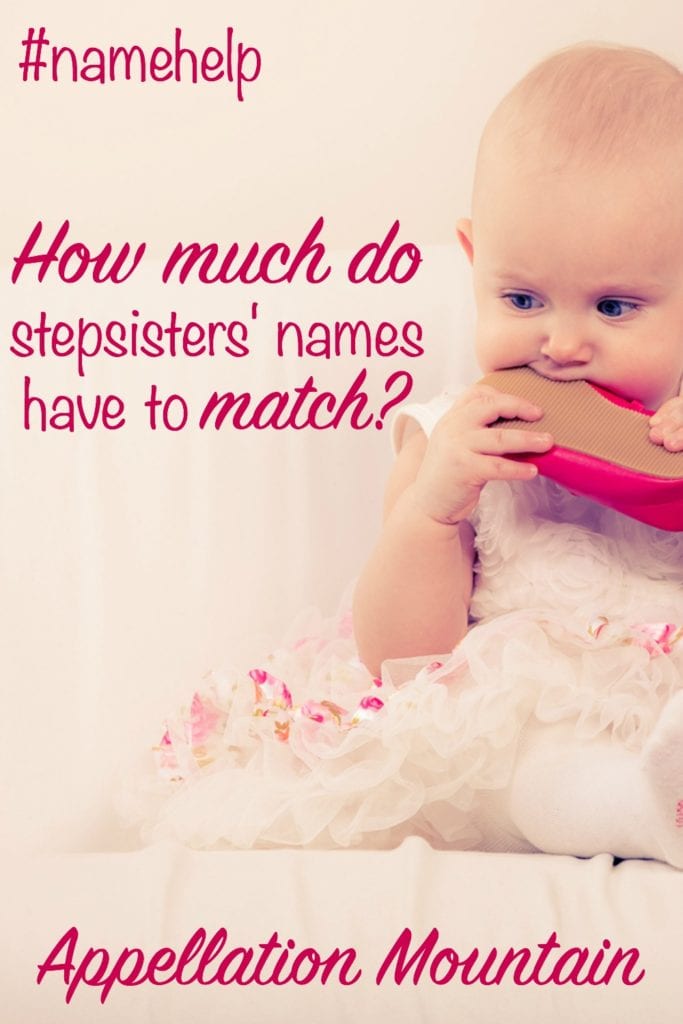 Update: “This is long overdue! Thanks so much for the help. We almost named her Caroline McKenna, but I kept coming back to Maeve, but my husband wasn’t sure at first. But he eventually warmed up to the idea. And so she’s Maeve Caroline. The name suits her to a T!”

My husband has two wonderful daughters from his first marriage. The girls’ names are Morgan Elizabeth and Mackenzie Marie. They’re in middle/high school and live a few hours away, but we try to see them as often as possible.

We have a three year old son together, William Joseph. It’s the name of both of our fathers, and it is the only name we ever discussed when we were pregnant the first time. Both grandfathers died before Will was born, so it was even more important to use those names. We didn’t even argue about which name came first because I have a brother who is a junior.

Now we’re expecting again. It’s a girl. She will complete our family, and we are so excited!

It turns out that my husband really, really likes names like Morgan and Mackenzie, and wants a similar style name for our daughter. I do not.

His list: McKenna, Harper, Marlowe, Maven, Quinn, and a bunch of other last name/word names that he brings up every once in a while. McKenna is his top choice – he likes the idea of all three sisters having M names.

My list: Alice, Adelaide (but NOT Addie!), Josephine (except too much with son’s middle?! maybe not good with our last name?), Cora, Edith, Violet (too popular?), Georgia (too Southern? awful with our last name.)

We might use Carol, his mom’s name, for a middle.

I’m not due until the end of January, but where do we even begin?! He says we should just wait to meet the baby and see what she looks like, but what if we can’t agree then, either?

Our last name is three syllables starts with J and ends with son, but we’re not related to Scarlett. 😉

Read on for my response, and please leave your helpful suggestions in the comments.

First, congratulations on your new baby!

Second, you are absolutely correct. When a couple has three or four favorite names, any of which they’d be happy to use, but none of which seems like The Name, waiting to meet the child isn’t the worst idea in the world.

But that’s not your situation at all, is it? You have a fundamental disagreement on style, and a short list of exactly zero names. Waiting until the last minute to make a choice is not likely to result in easy agreement.

Before we dive in, let’s look at your questions – because there are two separate issues here.

Half-Siblings, Step-Siblings, and Other Sibset Considerations

In some cases, matching half-siblings names is a no-brainer. Maybe you love your stepkids’ names, and might have chosen them yourself. Or they satisfy certain preferences – maybe your partner really wants to stick with Irish names or nature names or some other style.

But often, that’s not the way it happens at all.

If your children are close in age or will live in the same household, matching matters more. After all, their names will likely be said together more often. A little bit of coordination can be a positive.

In this case, your children will grow up some distance away from their half-sisters, with more than a decade between them in age. There are plenty of practical reasons why their names don’t have to sound like part of the same set.

If you and your husband agreed on Alice or Edith, you’d be all set now. The problem is that there’s one more hurdle: you don’t actually have a list of names!

Let’s look at a few approaches – and a couple of names that might work:

I also wonder if there are any family surnames that might work? Sometimes a surname name feels very different if it has a personal connection.

My favorite idea, by far, is Marlo or Margot. It seems like the middle point between your styles, and still connects this new baby to her older siblings – without completely compromising your preferences!

Okay, now it’s time to open it up to readers: what would you suggest to Kari and her husband?