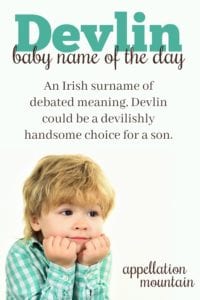 Devlin conveys a devilish, Irish charm. Could it be the next Declan?

Like so many potential names, this one started out as a surname.

It’s the Anglicized form of the Gaelic Ó Dobhailéin, son of Dobhailéan. Some suggest that Dobhailéan comes from dobhail – unlucky.

Or maybe it means something more like brave or fierce. The O’Develin family served as clan chiefs in the Middle Ages.

We know the name is not connected to the devil. That word comes from the Old English deofol, from the Late Latin diabolus, which has Greek roots. So the resemblance between the name and the word? Pure coincidence.

It first appears in the US Social Security data in 1961, when five boys received the name.

One possible reason a few parents took notice: singer Johnny Devlin. He became the New Zealand equivalent of Elvis, from 1958 onwards. When major acts, like the Everly Brothers and the Beatles, toured New Zealand and Australia, Johnny was their opening act.

But could he have had an impact on how American parents named their children? I’m not sure.

It’s also possible some parents embraced it as a family surname.

Or maybe it owes its rise to Devin. Devin entered the US Top 1000 in 1957, a surname with Irish and English roots. Spell it Devon, and it’s yet another name, this time an English place name taken from an ancient British tribe. And, of course, Devin almost certainly owes something to Kevin, another Irish name, one that entered the US Top 20 in the late 1950s and became a sensation.

Regardless of the reason, from the 1960s onward, this name pops up more and more. It’s heard as both a surname and a given name, if only in small numbers.

In 1974, Hanna-Barbera introduced an animated series titled Devlin. It followed the Evel Knievel-like Ernie Devlin, and his siblings, Tod and Sandy, as they performed with a traveling circus.

1981’s The Devil and Max Devlin cast Elliott Gould as a con man who makes a deal with the devil – he’ll sell out three innocents to save himself from eternity in hell. Things don’t go as planned, and Max is saved instead. His potential victims? They get happy endings, too.

Neither the cartoon or the movie was a hit, but both reflect how the name filtered into occasional use.

By 1990, DC Comics included a minor character by the name, and Judge Dred comics got their Devlin in 1992. There’s a 1992 political thriller made-for-TV movie with the title, inspired by the main character’s surname. And World of Warcraft, the role-playing game, includes a character, with this as a first name, too.

The name slowly made its way into the mainstream, and by the beginning of the twenty-first century, more than 100 boys received the name every year.

Maybe some parents were influenced by various pop culture associations.

Or maybe some re-interpreted the name. While no one wants their child to represent evil, we sometimes use “devil” as a synonym for “rogue.” In a good way! If you describe someone as devilishly charming, he’s someone who’s impossible to resist.

At least a few of the fictional characters seem to pick up on this vibe. It feels far more subtle than the epic boy names we’ve embraced in recent years.

Devlin: Just Go with It

A handful of girls have been given the name, too. One reason: 2011 rom-com Just Go with It. Brooklyn Decker plays Palmer and both Jennifer Aniston and Nicole Kidman answer to Devlin at different points in the movie.

While the movie wasn’t a hit, it seems to have pushed Palmer into wider use for girls. And any name with a -lin sound seems to be a possibility for a daughter. But the movie doesn’t seem to have had a lasting impact on our Baby Name of the Day.

In fact, Devlin is fading in use for girls and boys alike. As of 2017, just five girls and 28 boys received the name. That’s pretty rare.

In many ways, it would fit in perfectly with current trends. Declan sits just outside the current Top 100. Names like Logan, Lincoln, and Dylan have become go-to choices for boys.

With a just slightly different sound, it’s easy to imagine Devlin fitting in, while still standing out. And Dev remains a cool nickname.

And yet, I suspect that some parents pause at the idea of their child’s name sounding so close to devil. While it’s not Lucifer, it does come close to that eyebrow-raising sound. So maybe the name will never catch on in a big way. Because in an era of Maverick and Messiah, Rebel and Slade, Devlin sounds positively restrained.

What do you think of Devlin? Is it devilishly handsome, or just a little too dark?