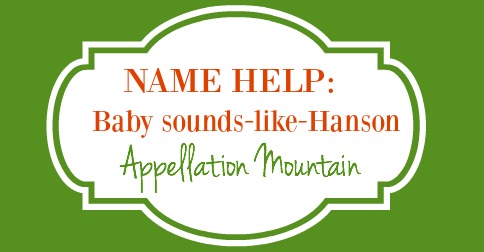 We are expecting our second child in March.

Our son is Grant Stephen. Stephen is in honor of my late father. Grant was chosen because it is recognizable but not too common, is easy to spell and pronounce, and does not have a default common nickname like Ben, Chris, or Max.

Our last name sounds like Hanson, so we are avoiding names that start with H. Also, we do not want to pick another G name. Many names that end with ‘n’ sound wrong with our last name, but not all. We prefer names that are gender specific.

We are not finding out the gender this time, so we have to decide on two names.

For a girl, my top pick is Ruby, followed by Cecilia and Selah. My husband likes Brooke (though I find it a little dated) and Delia. He also suggested Eden, which seems kind of “out there” for him, but we’re thinking about it. The middle name will be Louise, a family name.

I love all of these girl names, and feel like I just need to choose one, but for boys, we can’t seem to hit any of the right notes.

For boys, my top pick was Dean, but I feel like it is a little too bad boy. I also kind of like Carl, Calvin, and Asher, which my husband does not. I adore Harvey and it would probably be the name, but can’t go with the H-H initials. My husband liked Mitchell last pregnancy, but we both fell out of love.

Other family names that we could use for inspiration or a middle name are Brian and Charles.

I think Grant is one of those great trend-resistant names. I’m not surprised to meet a 40-something Grant, or a four year old Grant. It’s tough to pin to a specific generation, and it sounds like that’s exactly what you were after.

But it is funny how a sibling’s name can make Grant feel more decade-specific, isn’t it? Grant and Brooke suddenly feel very 1980s to me, and I immediately picture Grant Show (remember Jake on Melrose Place?) and Brooke Shields.

For that reason, I’m most drawn to Delia on your girls’ list. Delia feels a little more vintage than Grant, but I think that’s part of the appeal. Neither name is easy to peg to a specific generation, and if I did look at the years the names were most popular, they’d be different – which reinforces the sense that the names are meant to be trend-resistant. But the same is true of all of the names on your list except for maybe Eden and definitely Brooke. (Though I do like Brooke quite a bit, 80s name or no.)

I do think the ‘l’ sounds run together in Selah Louise in a way that isn’t ideal. Delia Louise doesn’t seem to have that problem, and I think that Cecilia Louise, Eden Louise, and Ruby Louise are great.

Now, on to the tougher assignment: a name if Baby sounds-like-Hanson is a boy.

Dean – Is Dean too bad boy? Hmmm … I wouldn’t think so. True, James Dean was the Rebel Without a Cause, all leather jacket and fast cars. But Dean Martin was a crooner from the cocktail era, and there’s Dean Thomas in the Harry Potter series – he’s one of the good guys. The only reason that Dean gives me pause is that Grant and Dean almost sound like a surf rock band. No, wait, that’s Jan and Dean. But I would have suggested Dean if it hadn’t already been on (the edge of) your list.

Clark – Another name with a midcentury vibe, part-Clark Gable, part-Clark Kent. It also brings to mind the Go West pioneering spirit of Lewis and Clark. Altogether, it’s a likable name for a boy that’s been in steady use over the years, and is gaining in popularity today, though it’s still less common than Grant.

Lewis – Speaking of Lewis and Clark, I wonder if you’d like Lewis?

Seth – My first suggestion was Heath. Rugged, outdoorsy Heath, so neglected today! But – sigh – Heath is out for the same reasons that Harvey got the boot. (I also dropped Hugo and Hugh, too – so many great  H names for boys!) So I wonder if Seth is worth a mention? The ‘th’ sound is stylish once more, with names like Theodore and Thatcher on the rise. I think Seth has a timeless quality without quite being a classic along the lines of James and William.

Marshall – Here’s one of the first names that came to mind as soon as I read Mitchell: Marshall! It’s a surname name with a cowboy cool vibe, though unlike Wyatt, it’s still pretty under-the-radar. Grant and Marshall sound like they could be brothers born in the 1930s or 50s or 70s – or today.

Evan – Calvin and Harvey both share that great letter ‘v’, which made me wonder about other boy names with ‘v’ in the middle. I’ve met plenty of Evans, most of them school-aged. But Evan has been in the US Top 1000 since 1983. It’s not exactly timeless, but it’s more of a modern staple name than a trendy one.

Bryce – Brian made me think of other Bry- names for boys, like Bryson and Briar and Bryce. Bryce peaked right around the Top 100 around fifteen years ago. That means that the name is reasonably familiar, but isn’t likely to head for the Top Ten any time soon. I think Grant and Bryce sound like brothers.

Colin – Colin can be an Anglicized form of a Gaelic name, or it can be a medieval nickname for Nicholas. (Nicholas -> Col -> Colin.) Colin, like Bryce, has a long history of use and peaked around the Top 100 a while back. I also think it’s one of those ends-with-n names that sounds good with your sounds-like-Hanson surname.

Drew – Let’s send with one more short name. Drew can be short for Andrew, a surname, or an independent given name. While Drew Barrymore is a famous woman with the name, I still think this one is very much a boy’s name, probably thanks in part to quarterback Drew Brees. I think Drew sounds-like-Hanson goes together beautifully, and I also think it pairs well with Grant. Grant and Drew.

Charles seems like the logical middle with most of these names, but maybe not all.

If I haven’t been able to talk you into Dean, I think my next choices would be Marshall and Drew. I think Grant and Marshall hit that timeless-but-not-exactly-classic mark. And Drew is another one of those names that seems like it would be wildly popular today, if only it hadn’t been steadily popular thirty years ago.

Readers, what would you suggest to Gail and her husband? Do you have a favorite name from their girl shortlist? And are there any other names they should consider if their new baby is a boy?