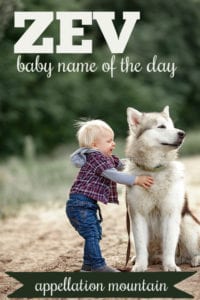 Zev scores high on Scrabble, brings to mind a fierce, majestic creature, and shares the short, punchy style of Jax. What’s not to love?

Thanks to Kells for suggesting our Baby Name of the Day.

Strictly speaking, this is a two-syllable name: Ze’ev. It appears in the Old Testament, but as the name of a villain.

It means wolf, and since that first Ze’ev – also called Zeeb – attacked Israel, it seems unlikely inspiration for a child’s name.

Instead, the name reflects two influences.

First, Benjamin. In the Book of Genesis, Benjamin is the youngest of Jacob’s twelve sons, and a “wolf that raveneth.” Choose your translation, but it feels pretty dark. But it also suggests positive traits. Benjamin’s descendants went to be warriors. Plus wolves symbolize bravery. There’s a positive reading of the name Wolf, and Zev shares it.

Then there’s another reality: in German, Wolf – and names containing the element Wolf – were common. Zev may have come into use as the Hebrew equivalent. The Yiddish Velvel is also heard. A nineteenth century European singer and entertainer was born Benjamin Wolf Ehrenkrantz, but became known professionally as Velvel Zbarjer.

In The Lunar Chronicles series, Marissa Meyer’s YA reinvention of so many familiar fairy tales, Little Red Riding Hood is called Scarlet, and she falls in love with Ze’ev “Wolf” Kesley.

If Zev didn’t exist, we would have invented it. Want proof? Star Wars gives us a minor character by the name, first seen in The Empire Strikes Back. That was 1980.

It sounds at home in a galaxy far, far away. But, of course, plenty of the character names claim traditional roots – Han as an update to John, Leia as a form of Leah, and Luke, Owen, and more as … well, Luke, Owen and more.

Another example: a famous racehorse from the 1920s was named Zev in honor of Colonel JW Zevely, a friend of the horse’s owner. The letter sit there, waiting for discovery.

Up until the 1950s, the name failed to appear in the US Social Security Administration name data. That means that fewer than five boys were named Zev. Though, of course, many may have been called Zev, especially given the tendency for immigrant families to assimilate their children’s names formally, while retaining more familiar nicknames at home.

Today, the opposite phenomenon occurs. Even if we have to go back to our great-grandparents, families today are often interested in finding heritage choices for their children.

So the lack of data doesn’t mean the name was unknown.

That was enough to push the name into the US Top 1000 for the first time ever.

Marissa Winokur welcomed son Zev Isaac back in 2008. When Winokur competed in 2018’s Celebrity Big Brother last year, she talked about her son lots. He appeared in post-series interviews celebrating his mom’s win. And so that might explain the rise in use that bumped Zev into the Top 1000 – at last!

Overall, it seems like an intriguing choice. Zev is brief and complete, with a strong meaning and a modern sound.

What do you think of this name?