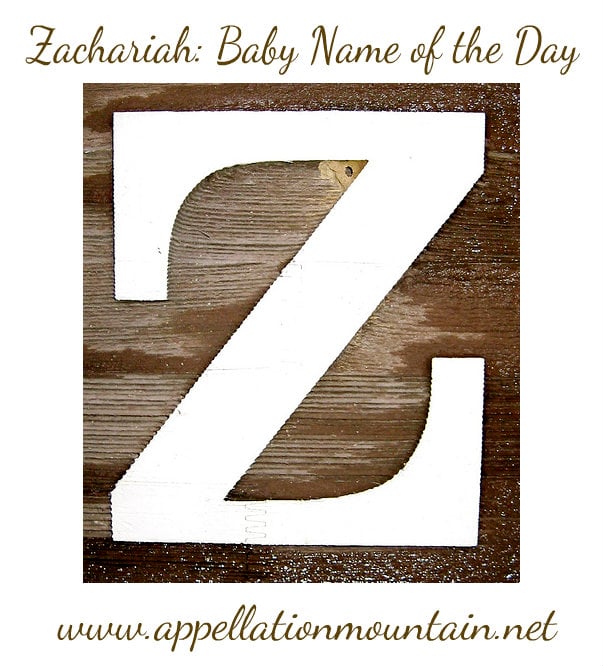 Take two parts Zachary, mix with a healthy dose of Biblical favorites like Elijah and Isaiah, and what do you get?

Why, our Baby Name of the Day, of course.  Thanks to Colleen for suggesting Zachariah.

Just as Margery and Cecily were the preferred feminine forms of Margaret and Cecelia in the Middle Ages, Zachary became the common version of the Old Testament Zechariah.  Other forms include Zacarias and Zacharias.

His meaning has appeal: God remembers.

There’s more than one Zechariah ancient days.  John the Baptist’s pop was a Zechariah.  There’s also the Old Testament Book of Zechariah, written during the Babylonian exile.  And there’s a monument in the Old City of Jerusalem known as the tomb of Zechariah.  Supposedly he was martyr stoned for defending his faith.  The only trouble is?  The tomb is solid rock, so if that Zechariah lived and died, his final resting place is unknown.

The Kingdom of Makuria – today located in modern Egypt and Sudan – was ruled by Zacharias I in the eighth century, and Zacharias III about a century later.  Pope Saint Zachary was head of the Catholic church in the 700s.

In English, ancients named Zachariah are often referred to as Zachary, making Zachariah tough to trace.

The -iah ending was out of favor for centuries.  Even the Puritans preferred the -y ending.

The twelfth president of the United States was named Zachary Taylor, which seems to put Zachary in the company of classics like George, John, and James.

While Zachary is mainstream, Zachariah feels more overtly Biblical.  That shouldn’t be a problem circa 2013, though.  Noah, Elijah, Isaac, and Isaiah are all mega-popular picks with Old Testament ties.

And then there’s our affection for the letter Z, as evidenced by:

So where does that leave Zachariah?

Now that nickname Zach – and Zack and Zac – are approaching dad name territory, parents are embracing Zeke and other Z options.  If you’re looking for an Old Testament name with modern flair that likely isn’t headed for the Top 100, that makes Zachariah a safe choice.