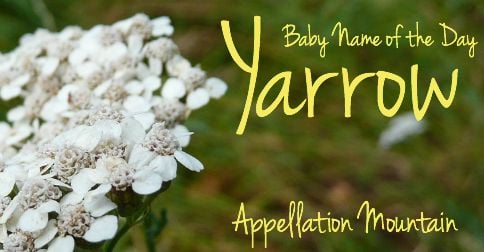 Looking for an under-the-radar nature name that feels modern and gentle?

Thanks to Emilee for suggesting Yarrow as our Baby Name of the Day.

Yarrow is a plant, but the names origins aren’t obvious. The plant was called gearwe in Old English. It might have something to do with the color yellow, which would have been geolwe.

But yarrow – also known as achillea millefolium – is usually yellow, or sometimes white, or white and yellow.

While it’s quite pretty, it’s often considered a weed.

But it does have practical uses, including the ability to stanch bleeding. (An alternate name is “nosebleed plant.” Not pretty, but descriptive.)

In the Victorian language of flowers, yarrow was a cure for heartache.

It can also be made into tea.

With bold, showy botanical names like Lotus and Azalea under consideration by some families, Yarrow has a gentler appeal, more wildflower than hot house.

There’s a second reason this one qualifies as a nature name. In Scotland, the Yarrow Water is known for excellent salmon fishing. The name might come from a Celtic word meaning rough, describing the river’s waters.

There’s a second river by the name in Lancashire.

One of the most famous bearers of the surname was Alfred Yarrow. In 1865, he established a shipbuilding firm. From the 1860s into the early twentieth century, the shipyards built hundreds of ships for the Royal Navy. Yarrow also designed an innovative boiler. For his services to the nation, he was eventually created a baronet.

In more recent history, there’s Peter Yarrow of Peter, Paul and Mary fame. Peter’s family was Ukrainian. His dad had shortened their family name from Yaroshevitz.

Yarrow: As a Given Name 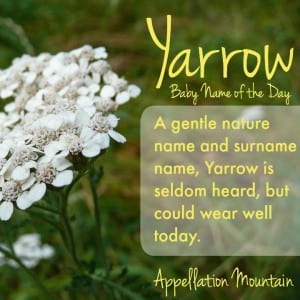 There should be some kids called Yarrow. Surname names commonly migrate to the first spot, and our passion for nature names has been going strong for decades.

And there are a few, but maybe not as many as you would expect:

It’s not necessarily a girls’ name, however, and Yarrow registered as a boy’s given name a few times in the 1970s, too.

Despite all of these attributes, Yarrow remains under the radar. It could be a great opportunity for parents after a name that’s truly different, but still very wearable.