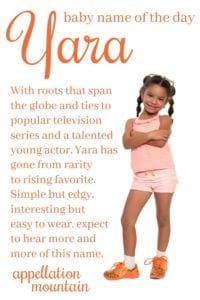 Yara combines the appeal of a blockbuster series and a talented young actor – and so much more.

No surprise our Baby Name of the Day recently debuted in the US Top 1000.

Let’s start our story in Brazil. The Tupi people called the region home long before the Portuguese invaded. This name comes from their language, and means water lady, or maybe even water queen.

If you’re thinking that sounds something like a mermaid, you’re right.

The y spelling is used, but Iara is more typical, and Uiara is seen, too.

It’s said that the beautiful Iara sits by the water, singing to lure men to her side. In some tellings, she offs them. In others, she simply holds them captive with her underwater for the rest of their lives.

It’s a familiar folktale, and just like other mermaid stories, has made its way into popular culture. A 1928 novel and the 1969 film it inspired told a version of the Iara myth.

It’s used as a given name in Brazil, as well as Portugal. And yet that only accounts for part of this name’s appeal.

You’ll also find the name listed as Arabic, with the meaning butterfly.

Butterfly names could be big – after all, flowers, trees, and birds are just a few of the categories parents have embraced. No question, nature names are going strong.

While I had trouble confirming the Arabic origins of the name, it’s clearly used throughout the Arabic-speaking world. There’s a popular Lebanese pop singer who uses this as her stage name.

I’ve also read that it comes from a Persian word meaning strong and capable.

Or maybe this name takes you all the way to the Iron Islands.

On Game of Thrones, Yara Greyjoy is Balon’s daughter, sister to Theon. She masters sailing and warfare, and earns the respect of her father as a capable leader.

George R.R. Martin originally named the character Asha in his novels. But there’s another character with a similar name, so the television show made a change. Gemma Whelan has played the part since 2012. It certainly fits right in with the rest of the Westeros-Winterfell crowd.

Yara: By the Numbers

Here’s a curious thing: there’s no measurable rise in the name’s use post-Game of Thrones. And the folktale and the butterfly connection are tough to unravel. Surely they’re familiar to some American parents, and yet they’re not broadly known.

That 1979-1980 spike comes thanks to a Mexican telenovela called Yara, which premiered that year.

But we know for certain what tipped the name into the top 1000 this year – or make that who.

Hit ABC sitcom Black-ish premiered in September of 2014. The series introduced us to Dre and Bow, plus their children: sons Jack and Junior, and daughters Diane and Zoey. Zoey is played by Yara Shahidi.

Shahidi might be a teenager, but she’s been in the spotlight for years. She started out as a model, appeared in commercials, and eventually made her big screen debut in a 2009 movie with Eddie Murphy. Her career continued to flourish, with television and movie roles.

But it’s Black-ish that made her a household name, and now she has her own spin-off series, Grown-ish.

Shahidi’s dad is Iranian-American; on her mother’s side, she’s African-American and Choctaw. I assume Yara honors her dad’s roots, but I couldn’t find confirmation.

Grown-ish premiered in January 2018, but the series was ordered the previous May, and press about Shahidi increased dramatically. I suspect the buzz about the spin-off gets credit for pushing this name into the Top 1000 at last.

Here’s the thing, though – even without Shahidi’s considerable appeal, this name fulfills exactly what lots of parents seek today.

It shares the simplicity of Emma, but with an international pedigree that spans the globe. There’s Brazil and Lebanon in our story, but there’s also the Yara Castle ruins in Okinawa, the site of a former stronghold built way back in the sixteenth century. I’m not clear what the name might mean in Japanese, but it lends another layer to the world-spanning choice.

It’s easy to imagine parents after something simple but not Western in origin finding this name terribly appealing. And let’s not forget the Game of Thrones and Black-ish audiences who may have made a note of this as a possibility over the last few years.

What do you think of Yara? Would you consider the name for a daughter?