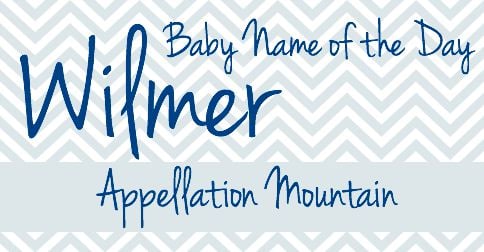 Thanks to Winter for suggesting Wilmer as our Baby Name of the Day.

Wilmer didn’t immediately strike me as what it is: a surname name. Maybe that’s because it ultimately comes from the Germanic Willamar – from the elements desire and fame. Or maybe it’s because the Scandinavian form, Vilmar, is far more familiar to me.

If you live in Washington DC or Virginia, you’ve almost certainly heard the surname McLean.

Grocer and landowner Wilmer McLean’s farm was the site of the First Battle of Bull Run during the Civil War in July 1861. The family home became the Confederate headquarters and later a hospital.

When war broke out, McLean was in his late 40s and considered too old to return to active duty. The family relocated to Appomattox.

In 1865, the family’s home would feature in history once again, as Confederate General Robert E. Lee surrendered to General Ulysses S. Grant at Appomattox Court House – where the McLean family had been staying since leaving their farm.

The family went broke after the Civil War, because Wilmer had kept much of his money in Confederate dollars.

I’d assumed that the Virginia community – which is now a wealthy enclave in the DC suburbs – was named for McLean. But it isn’t so. John Roll McLean, the publisher of the Washington Post in the early 1900s, was the inspiration for the place name. Since John was a native of Ohio, there doesn’t seem to be any connection between the two McLeans.

Other notables with the name include a character in The Maltese Falcon, and African American baseball player Wilmer Fields, a prominent Negro Leagues player in the 1940s and 50s.

But after the 1920s, this name’s decline was slow but steady. Other Wil- names, like Willard, Wilbert, Willis, Wilbur, Wilson, Wilfred, Wilford, Wilton, and Wiley were all on the decline, too. That ’70s Show debuted in 1998, and ran through 2006. In the process, it made stars of its cast of young actors, including future power couple Ashton Kutcher and Mila Kunis.

But let’s talk about Fez for a minute. Fez was the exchange student in the circle of friends, and it’s never revealed exactly where Fez calls home.

The actor who played Fez is Wilmer Valderrama, and Valderrama’s roots are Colombian and Venezuelan.

Post-That 70s Show, he’s starred in the Disney Channel’s Handy Manny and is now part of the new ABC series Minority Report, as a police detective.

That matters, because if Minority Report is a hit, Wilmer could get a boost, too. In 2007, just after That 70s Show left the air, Wilmer was given to 173 boys – a mini-peak, after years of decline. 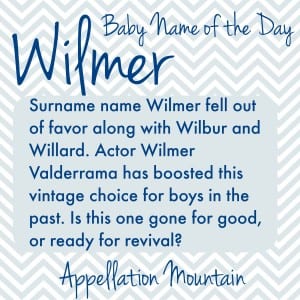 And yet, most of the Wil- names that declined in the first half of the twentieth century remain in style limbo. Wilfred is back in the UK, but in the US? Not so much. And Wilbur is still locked in black-and-white with Mister Ed.

But with built-in nickname Wil, don’t count Wilmer out. It could be the right mix of fusty-and-forgotten and fresh-and-new for 2015.

What do you think of Wilmer? Does it feel vintage and interesting, or is this one not quite ready for revival?