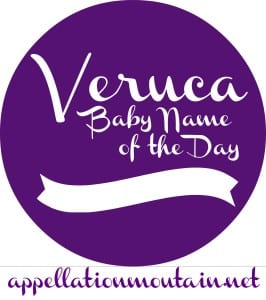 She’s a reprehensible child who meets a bad end in Charlie and the Chocolate Factory.

Could this ever be the name of a real child?  Our Baby Name of the Day is Veruca.

In Charlie and the Chocolate Factory, Veruca Salt is the very spoiled daughter of wealthy parents.  Both of the movie versions make her British, and in the Tim Burton version, her interview is filmed at a huge stately home outside of London called Hatfield House, which you can tour.

It’s fun to watch Veruca’s tantrums, but you wouldn’t want to raise your child to become so difficult and demanding.

But you might admire that vibrant V name.  Victoria, Veronica, Vivica, Valentina … there are some great names starting with the letter V.  It’s not a stretch to imagine Veruca fitting right in.

The trouble is that Roald Dahl didn’t borrow the name from earlier uses, nor did he invent the name from thin air.  Veruca comes from verruca – the Latin word for wart.

More broadly, verruca can refer to a growth, or even just a flaw or failing.  It’s obscure in the US, but still very much used in British English.

That’s not just a horrible meaning – that would be a serious challenge if your California-born daughter decided to study abroad in London.

Has any one ever been brave enough to borrow Veruca?

Looking at US Census records, it appears that there have been a very few, but they all predate the 1964 publication of Charlie and the Chocolate Factory.  They could be mis-recorded.  And there have never been five or more children given the name in any single year.  So Veruca is just about unknown as an actual child’s name.

But there have been two uses that come to mind:

The phrase “Vercua Salt” is sometimes used as a synonym for “spoiled brat.”  Since the movie adaptations of the book came out in 1971 and 2005, and are frequently shown, it is tough to claim that this reference is fading.

All of this makes me think that Veruca might be best left alone, and yet I can’t escape her quirky-cool sound.  I’d put her on the same list as Djuna or Luscinia – seriously daring names that might fit in better than we expect.

Names4Real mentioned a few sightings of Veruca, as well as a Veruka Nine – I’d love to meet those parents!

Maybe all that’s missing is a fictional character or two called Veruca, characters who have lots of good traits.  And yet, with the British use of the term to refer to warts, I have a hard time imagining that happening anytime soon.

What do you think of Veruca?  Is she wearable, or would it be unfair to saddle a child with a name with such a negative meaning?