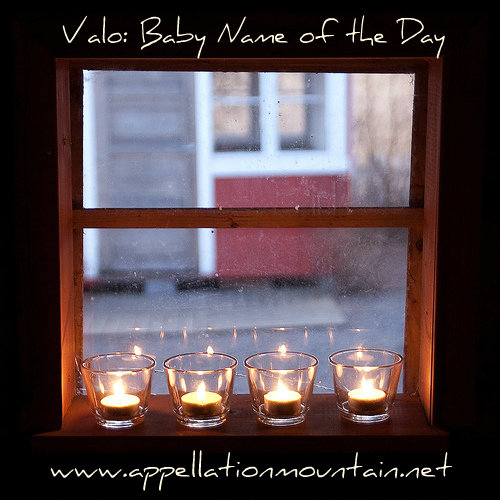 It’s a seldom-heard ends-with-o name that could wear well in 2013.

Thanks to Kayla for suggesting one of her favorites for a son.  Our Baby Name of the Day is Valo.

I first heard Valo as a girl’s name, but Valo is slightly more common for boys.

There are two possible meanings and origins, plus one association that might inspire:

There’s no evidence that any of those uses have inspired parents to use Valo as a given name.

Valo is a surname.  This leads us to a funny little corner of pop culture, and one possible explanation for the name’s occasional use.

Brandon Margera – better known as Bam – is a professional skateboarder turned general daredevil and reality star.  Margera isn’t exactly a role model: he made his name on MTV’s Jackass.  But he is well known, and in 2003, he played a character named Valo in Haggard, an indie flick about a bad break-up.

We can assume that Margera was inspired by his pal Ville Valo, a Finnish singer-songwriter, best known as frontman of heavy metal band HIM.  The pair appear to be close – Ville and Bam even have matching tattoos, and the Finnish rocker has made guest appearances on Bam’s various shows.

Then there’s the Hungarian connection.

Elmer Valo was a former baseball star, born Imrich Valo.  Valló is a Hungarian surname that could mean shepherd.  Since Imrich is definitely Hungarian, this takes Valo in a different direction once more.  I also found a Slovenian film director from the first half of the twentieth century named Valo Bratina.

While Valerie and Valentina make Val lean feminine, that’s not enough to call it.  With so many ends-with-o names popular for boys, Valo fits right in with Arlo and Leo and Matteo.  Add it up, and Valo is a modern shape-shifter, a name with no real history of use, and yet one that feels grounded nonetheless.