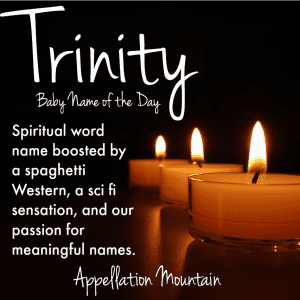 It’s a spiritual name with cowboy and sci-fi ties.

Thanks to Aurelia for suggesting Trinity as our Baby Name of the Day.

Strictly speaking, a trinity is a trio. The word’s roots are Latin: trinitatem comes from trinus – triple, ultimately from tres – three.

But it’s meant so much more for centuries. As an English word, trinity traces to the 1200s.

The concept of the Holy Trinity – the Father, the Son, and the Holy Spirit – is older still. The Latin term was probably first used by Theophilus of Antioch in the second century. Others wrote about the idea even earlier.

While virtue names have long histories, Trinity is bigger than that, a central tenet of Christian faith, much debated and explored over the millennia.

Despite the weightiness of the concept, Trinity has sparing history as a given name as far back at the 1920s. Maybe that’s because Trinity fits the three-syllable, ends-in-y pattern for a girl’s name, a pattern in use from Dorothy to Kimberly to Emily to Everly.

A small number of girls were given the name in the 1960s, but Trinity really made waves as in the 1970s.

In 1970, spaghetti Western They Call Me Trinity introduced Terence Hill as a rag-tag gunslinger who alternates between good guy and villain. He’s named Trinity. Despite being set in the American West, the original version of the movie was filmed in Italy, in Italian. (Hill was born Mario Girotti, in Venice.)

The Western became a big hit in the US, too. The sequel, Trinity is Still My Name, was an even bigger hit.

Despite the cowboy cool of Hill’s character, many parents still perceived Trinity as a potential girls’ name. Maybe that’s because of 1970s favorites with a similar rhythm, like Kimberly, Tiffany, Emily, and Melanie.

The Matrix starred Keanu Reeves as Neo, a computer programmer who discovered that the real world was actually a complex manufactured reality, designed by machines to oppress humankind. Neo becomes the leader of a rebellion. 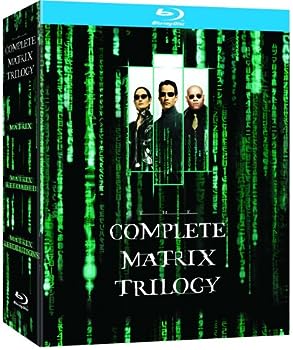 The movie was a sensation, and two sequels followed.

Carrie-Anne Moss played Trinity, another hacker escaped from the manufactured world of the Matrix. She’s a love interest for Neo, but also a skilled fighter and ally. We learn that she chose Trinity as her alias when she first hacked a database, but we never learn her given name.

On the one hand, we’re all about meaning-rich names, from the more traditional virtues to bolder, modern possibilities, like Legend and Miracle. Trinity fits this pattern, with a clear nod to faith.

The Matrix character is a hero, one of the characters who dares to take the red pill and see things as they really are. She’s as noble a figure as Katniss or Hermione, and it’s no surprise that she inspired parents.

As of 2013, Trinity had fallen to #108. And yet, many families still like the idea of names that express their faith while feeling distinctly modern. If your shortlist also includes Nevaeh and Faith, Trinity might be another name to consider.

Do you think Trinity works as a modern virtue name?