These names claim plenty of history over the years. But they feel fresh and appealing today. And the numbers bear this out – every name has gained significantly in the rankings over the last year.

But they’re a little different, too. Many of these would fail to make the cut for the enduring classics list. They’re not exactly Katherine and Elizabeth, Mary and Jane. But they do come close. Plus, it’s a spot many of us can appreciate – names that feel nicely familiar without being overused.

To make this list, a name had to climb at least twenty spots in the rankings as of the May 2019 popularity data, reflecting births from January 1st through December 31st of the prior year.

It’s constantly changing. An earlier version from 2015 included Eliza and Louisa and Margot, all names that have gained in use since then. But it also included Irene and Judith and Adele, choices that haven’t quite come back into favor. So finding a name listed here doesn’t necessarily mean it will be on every parent’s shortlist this year … but then again, it might.

On to the trending traditional girl names 2019! 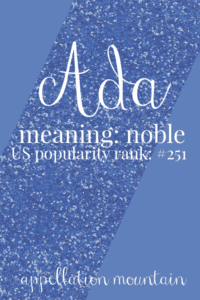 A mini name in the key of chart-toppers Ava and Mia, Ada shares roots with favorites like Adeline. And yet, the name offers something different. It’s spare and straightforward. But pioneering computer programmer Ada Lovelace makes this name a vintage antique with a sciences edge. It’s a Big Bang Theory baby name, quirky and smart, but still more down-to-earth than you might expect. While it’s long languished in obscurity, a jump of more than 50 places coming into the year suggests that’s about to change. 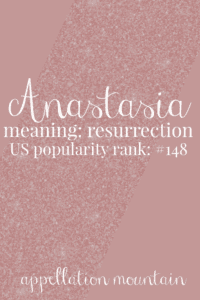 This name feels effortlessly romantic, thanks to its sound. But also because we associate it with the doomed Russian princess, the youngest daughter of the last tsar of Russia. Rumor long held that the Grand Duchess Anastasia escaped her family’s grizzly fate. Plenty of today’s parents grew up with the 1997 animated movie and its child-friendly, fairytale spin. Appropriately enough for the princess, the name means resurrection in Greek. 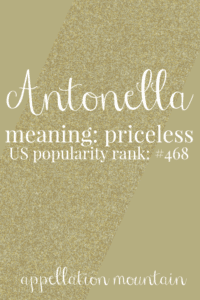 Quick, what’s the feminine form of Anthony? You might say Antonia, but plenty of answers are possible. There’s French Antoinette, Russian Antonina, and the long and lovely Antonella, an Italian name. Parents have embraced four-syllable girl names in recent years. Just look at long-time Top Ten picks Isabella and Olivia. Plus, we’re wild for Ella and A names, too. No surprise, then, that Antonella entered the US Top 1000 in 2016, and has climbed higher with every year. Could this be the next Alexandra? Or maybe it’s the next Alexandria – an almost-classic with a twist. 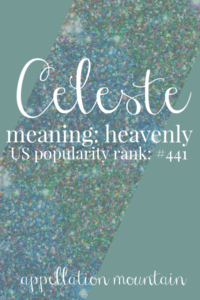 Celeste is a tea cup of a name: elegant, perhaps a little bit delicate. It means heavenly, both in the spiritual and the astronomical sense. (It shares roots with the word celestial.) While it’s always appeared in the US Top 1000, Celeste has yet to break into the Top 200. But the tailored -este ending, combined with a powerful meaning, makes this one of the trending traditional girl names that might finally be ready to catch on. 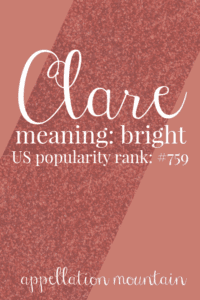 Does Clare really belong on this list? Spelled Claire, it’s become a solid Top 100 fixture, appearing there since the late 1990s. But this spelling seems just slightly different – more of a surname, perhaps even unisex. Dropping the ‘i’ makes it less French, and maybe even a little more streamlined, though the sound remains the same. And look at those numbers! Just when I was ready to declare Clare all but done, this spelling has rebounded in a big way. 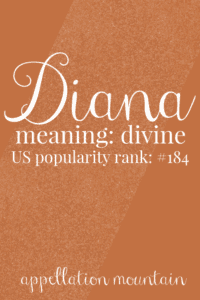 A goddess, a princess, a superhero – that’s quite a trio of notable namesakes. Doubtless Diana is back in the spotlight lately thanks to Gal Gadot’s turn in the Wonder Woman movies. But it’s also a near-classic choice, elegant and energetic, familiar over the ages. It comes from the same roots as our word divine, so it’s safe to say that the name means heavenly, like Celeste. And it brings to mind the night sky, since Diana is a goddess of the moon, putting this name in the company of favorites like Stella and Luna. With Wonder Woman 2 expected in June 2020, this name could be a classic lifted by pop culture, along the lines of Luke (Skywalker). 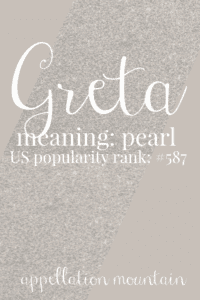 Originally a pet form of Margaret, Greta stands on its own today. Like Ava and Audrey, it offers some Hollywood glam. The luminous Greta Garbo earned a trio of Academy Award nominations for her star turns in the 1920s and 30s. The name has see-sawed in the rankings, but lately it’s back in favor. Maybe it’s the sound – as straightforward as Ella or Emma, but with a slightly more complex sound. Or maybe it’s the name’s status as sort-of kind-of classic, a pan-European choice that’s tough to peg to any decade. 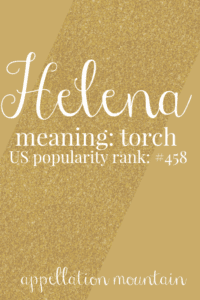 Helen occupied the US Top Ten from the 1890s into the 1930s. But the romantic, Latinate Helena has never come anywhere that close to the top of the charts. Maybe it’s because we debate this name’s pronunciation all the time in the English-speaking world. (Is it heh-LAY-nuh? heh-LEEN-ah? hel-ehn-UH?) Or maybe we just haven’t discovered it yet. Helena makes a great sister name for Lydia, a substitute for Amelia. And the numbers suggest parents may have finally discovered just that. 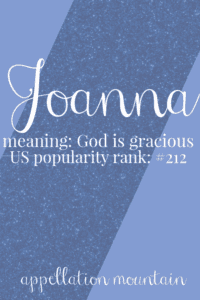 Feminine forms of John abound, in English as well as other languages. We tend to think of Jane as the classic, but Joanna appears in many translations of the New Testament, and has been used in English for ages. It spiked into the US Top 100 briefly in the mid-1980s, thanks to a smash hit single titled “Joanna” by Kool & the Gang. But somehow this name doesn’t feel too tied to the Reagan era. Instead, it fits with trending traditional girl names now.

I’ve yet to write about Joanna, but check back and I’ll update when I do. 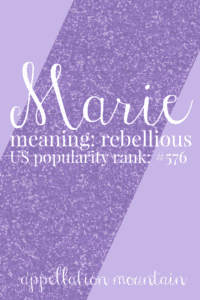 For decades, Marie languished as the go-to middle name option, another generation’s Grace or Rose. As sophisticated as Sophia, as gently French as Genevieve, and as straightforward as classic Alice or Jane, Marie offers parents the perfect fits-in/stands-out choice. It’s hard to believe that Marie last appeared in the US Top 100 all the way back in 1950s. Mary feels like the neglected classic, but Marie almost belongs in that category, too. It’s a great choice for parents seeking a name everyone will recognize, but few will share. 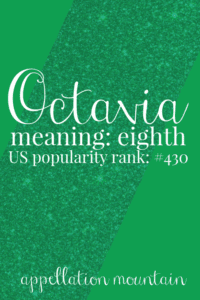 Credit television sci-fi series The 100’s fierce warrior character for finally putting this ancient name back on the charts. It’s actually ranked in the US Top 1000 more years than not. With Olivia on top, and Ophelia slowly gaining in the rankings, many have wondered when Octavia would join them. The answer? Right about now. Octavia returned to the US Top 1000 in 2017, and gained dramatically in use the following year.

Here’s the thing about Paula: it’s a little too soon for a comeback. Paula peaked in the 1950s, meaning a lot of women in the grandmother and mom demographic still answer to the name. But maybe this one has gone so far out that it’s back in again? There’s a character on My Crazy Ex-Girlfriend by the name, which might have sparked some interest. And it sounds completely different in Spanish, more like pow-lah than paul-ah. Plus, we’re wild for Poppy and Penelope and lots of other promising P names, so perhaps Paula is enjoying an earlier-than-expected revival.

I’ve yet to write about Paula, but check back and I’ll update when I do.

Rosalie takes the classic Rose and adds a certain flourish. It feels vintage and sparky, but still plenty traditional. Strictly speaking, it’s a form of Rosalia, a name borrowed from a medieval saint. But it feels like a completely different name. A musical-turned-movie made it a favorite in the late 1930s. With lots of other names from that decade feeling fresh once more, it’s no surprise that Rosalie continues to climb in use. 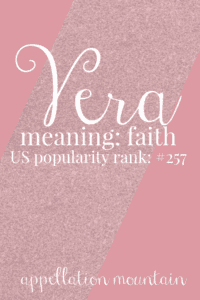 Violet and Victoria, Evelyn and Ava prove that we love a good V name, whether it’s at the beginning or the middle. Vera also offers two great meanings – faith and truth. And it’s short and complete, a name that fits with Emma. The vintage vibe is undeniable. Vera last peaked around the turn of the twentieth century, meaning it’s ready for a comeback at the beginning of the twenty-first. The name has gained in use dramatically since re-entering the US Top 1000 in 2009. It’s the very picture of a trending traditional choice today.

Those are my picks for this year’s trending traditional girl names. Would you consider any of these for a daughter?