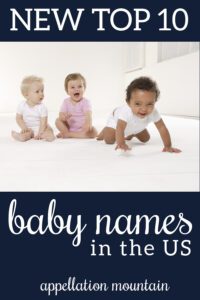 The Top Ten baby names in the US are here … and they look an awful lot like last year’s list.

At least at first glance.

The girls’ list is unchanged from 2020, though a few names shifted position.

Alexander dropped out of the Top Ten, falling to #13.

Theodore’s rise into the US Top Ten represents a big leap. The name only charted at #23 last year.

This suggests that we might just see some interesting changes in the boys’ rankings next time around. The most popular names aren’t staying there because they’re gaining in use. In fact, most are actually falling – it’s just that nothing has climbed high enough to replace them.