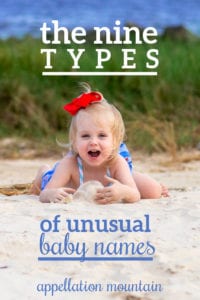 What do you mean by unusual baby names?

We throw around the word “unique” an awful lot. (Guilty as charged.)

Unique means one of a kind – just one.  It is impossible to be “a little bit unique.”  You’re either the only one, or you’re not.

Most of us aren’t after unique baby names, and that’s a good thing. Those are the eye-popping extreme choices, the Katelyn-spelled-Kviiilyn.

We mean something different: names that feel different to us, in some essential way.

There are at least nine different ways to think about unusual baby names – probably more. So it helps to pin down precisely what you mean when you say you’re looking for something different.

HOW TOP TEN PICKS CAN BE UNUSUAL BABY NAMES

9.  We want a name that no one in our family/immediate circle of friends has used.

Not so long ago, three girls on the street might all answer to Mary. Today, we rule out Mia because our sister’s college roommate (who lives across the country) chose it.

But that’s a very specific measure. If you don’t know any girls named Ava, then Ava might qualify as sufficiently different for your family.

The trouble with this approach? It’s the source of frequent disappointment and charges of name theft. After all, you might not know another Elijah when you have your baby shower. But a few years later, you’ve probably heard of a dozen.

First-time parents sometimes announce that they want to avoid common names, like Jennifer and Michael. Trouble is that names have moved on since the Reagan era. It’s easy to avoid repeating names you remember from your third-grade class picture.

What’s trickier is avoiding names that will feel too common by the time your Charlotte or Max is posing for class photos in a few years. If this is your definition of different, ask yourself: am I content with a name that seems different to my ears, or do I want my child’s name to stand out in his or her age group?

WHY JAXON AND EVERLEE CAN BE JUST DIFFERENT ENOUGH

7.  We want something just a little different.

It’s true – respelling a popular name can make it look a little different. Your daughter might be one of three girls called Ellie at her school, but if she’s the only Ellasyn, is that enough to satisfy? Does Jax strike you as fresher than classic, well-worn Jack? For many parents, the answer is yes.

For some parents, finding unusual baby names is about tweaking a favorite name. It’s nothing new, really. Katharine and Isobel co-exist with Katherine and Isabelle, and have for ages. Alaina and Zander might appeal to some families, while Elena and Xander miss the mark. Spoken aloud, they blend in to the crowd. But visually, they stand out.

Of course, change a name too much and you’re back into unique territory. I once saw Eighmei suggested as an updated spelling for Amy. I think it’s tempting to go too far.

5. We don’t want our child to be one of three in the kindergarten.

If you went through middle school as Ashley T., avoiding a wildly common name might be a priority. So we set a cut-off: nothing in the Top 100, definitely not the Top Ten.

And yet, that doesn’t mean you’ll be the first to think of the name you choose. Because your friends – and neighbors and colleagues – tend to have a lot in common. If you read the same books, frequent the same restaurants, and share the same politics? Chances are you’ll like the same baby names, too. (We know more girls named Cecilia than Harper, and several Benedicts – but no Masons.) After all, we’re all moving just a bit up the list to a sweet spot, somewhere around the #200 or so … where all of our friends and colleagues are also looking.

4.  We don’t want our child to share his name with anyone else at school.

For every Ashley T. content to pick Lawson over Logan and hope for the best, there’s a Heather S. fretting that others will discover Judson and Bridger.

And so we go a little higher up the list, maybe ruling out everything in the Top 500 … or even Top 1000. But the same phenomenon applies. Sure, Koa and Sylvie like unusual baby names – until it turns out your nearest and dearest were shopping the same section of the list, too.

In this case, the problem isn’t the repetition. Odds are against a classroom of 25 children including two Aldos or Calliopes. It’s that even one extra kiddo with the same name can take the shine off your choice. And names do climb in use. Maybe Mila and Everly weren’t on anybody’s list a dozen years ago. But your tweenaged Mila or Everly will probably meet a baby – or three – sharing her name in the next few years.

3.  Your child’s name will be familiar as a given name, but not widely in use.

As with #4, the challenge isn’t the type of unusual baby name. It’s that even one or two children sharing the name feels like a fail. Attempting to sidestep trends means choosing vintage names not quite back in favor – meet my kids, Howard and Lorna – or looking for something far removed from the Top 1000 list.

This strikes me as the textbook definition of unusual baby names, but a word of caution applies here, too. You might be one reality show star or Kardashian birth announcement away from discovering that you’re not the only one naming your baby Kiptyn or Dream.

2. Your child’s name won’t sound like anyone else’s name.

Combine #4 and #6 are you’ll arrive in this difficult place. Cleo is out, because she’s too close to Chloe. Orion would be great, if only Ryan weren’t so common.  Exhaustive review of the most popular names will rule out many a possible alternative.  It’s not a bad exercise, though.  If you know that explaining: “Her name is Adelie, not Natalie“ at every doctor’s check-up and library story hour will drive you batty, better to check for sound-alikes up front. Cayson may barely sneak into the Top 1000, but is there anyone who finds the name really unusual?

What’s a parent to do?  Look for unexpected surnames, nature and word names, place names, and ancient names that aren’t in common use. Thayer, Zinnia, Thisbe, Atlas, and Sorrel all spring to mind.  Juno was a hit film, but remains outside of the US Top 1000.  And for every Camden or London, there’s Abilene, Valencia, Cairo, Tempe, and Everest.

1. Your child’s name will be as close to unique as possible.

Take #2 to its logical conclusion and you may very well arrive a name that is unique – or nearly so.  Blogger Rebecca Woolf came pretty close when she named her daughter Boheme.  Her other kids’ names are Archer, Fable, and Reverie – they probably qualify under #2, but they’re not quite as singular.  I’ve heard of a boy called Shelter and a girl named Zaphyn, another two I think are pretty unusual.

And yet, when I went searching there were indeed two other Bohemes in US Census records, plus a pair of Zaphyns, and perhaps a dozen Shelters.  Even the most startlingly unusual names are probably not completely new.

Do you like unusual names?  How unusual will you go?  Are you content with Alice or searching for something more like Aspen?  Would you fret that Bruno and Fletcher are too out there, or would you consider Cortez? 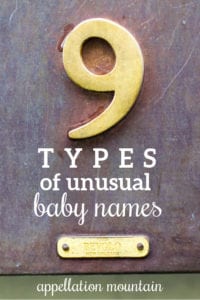