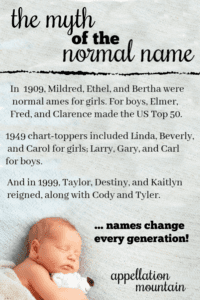 Let’s explore the Myth of the Normal Name.

Give your kid a normal name!

What’s even more dazzling is that this criticism comes in response to nearly any choice. Chart toppers like Harper and Hudson, classics like Edward and Eleanor.

I contend that there is no such thing as a normal name.

We think we know, of course. We can all list a few names that feel standard issue. But let’s hop into our time machine, because looking at the past? It proves my point.

The definition of normal is regular; conforming to the common type. The best measure of this then, must be the Top 20 – or perhaps 50 – names, and thanks to the Social Security Administration, data on “normal” names is readily available.

Scan it for a few minutes, and I’m sure you’ll agree: just like hemlines have always varied, baby names have come in and out of vogue. Except the Top 50 are far from stable.

In 1909, the following names topped the charts:

No fair, you say? That’s too far back to find a true measure of normal? Let’s try 1929, then. After all, many more Americans are living into their 90s these days. You may very well know someone with one of these chart-toppers from 1929:

Even in 1949 – a year some of us can remember – plenty of the favorite names would feel out-of-place on a baby born today. Instead, these are the names of our aunts and uncles, our kindergarten teachers and dentists, the nice old couple a few houses down:

1969’s list – a mere fifty years ago! – is packed with familiar names that would raise a few eyebrows today:

By now, it should be clear – the parents naming their kids Keith and Dawn wouldn’t have considered Clarence and Bertha, even though they were similarly “normal” names from a generation or two earlier.

Even the names of 1985 can feel like they belong to another era. We know – and like! – people with these names. But they’re firmly in the Mom-and-Dad-names category today. I mean, Bowling for Soup’s 1985 is fifteen years old.

My kid’s orthodontist is named Brandon, the #13 name in 1985. The cute boy names of the John Hughes generation grew up.

If you’re reading this, odds are that you were alive in 1999. That means you’ll recognize these names. But none of them appear in the US Top 100 today:

Myth of the Normal Name: Change is the Norm

Even a handful of 2009 names – Alexis, Alyssa, and Hannah for girls; Aiden, Jayden, and Landon for boys – have faded in use over the last decade.

The bottom line? The most commonly bestowed baby names in the US change constantly.

There’s a reason Phyllis, Shirley, and Troy dismiss Sebastian, Wyatt, and Elijah, Scarlett, Penelope, and Paisley as weird. If a kid in their generation had one of those names, it would stick out. But they’re just plain missing how much names change … and how quickly!

Are there classic names? Sure:

But even within those lists, some remain under-used today, like Peter or Frederick for boys, Theresa or Frances for girls.

Myth of the Normal Name: But What About …

It’s clear that all names cycle in and out of favor. But aren’t there names that have always been outliers?

Sure. At least if we narrow our frame of reference to the US, I’d agree that’s there’s only one Oprah. (Well, she has a few namesakes. But Ms. Winfrey was first.) And Wolfgang has never been a crowd-pleaser. (Or it hasn’t yet. More than 100 boys have been named Wolfgang every year since 2015 – a new high.)

An unconventional spelling can render a familiar name confusing. But mostly, names cycle in out of popularity. Today’s wait-what choice could be tomorrow’s fast-rising favorite.

There’s no such thing as a normal name – and that’s a good thing.