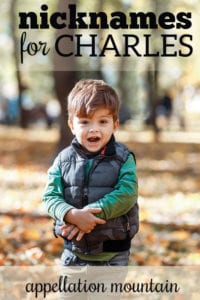 Charles nicknames are plentiful – and that’s a good thing!

After all, Charles is an impeccable classic.

From rulers to scientists to artists and authors, men of accomplishment in nearly every field of endeavor, there are a lot of men answering to the name.

But any name that traditional is bound to benefit from some nicknames. Prince Charles and Chuck Norris, Charlie Chaplin and Charles Barkley, Charles Darwin and Charlie Brown all share the same given name. But you’d never mistake one Charles for another.

Movies have given us Charlie Wilson’s War and Charlie and the Chocolate Factory. Different generations grew up watching Charles in Charge and Charlie’s Angels, the latter of which is rebooted every other decade.

With so many sharing this handsome, evergreen favorite, Charles nicknames come in handy!

We all know the obvious choices, but this list includes some that take a creative approach to nicknames for Charles.

It’s powerfully popular, too – probably the most popular of Charles nicknames. It’s bestowed independently, too. In 2021, Charlie ranked #189 for boys – and #127 for girls! That’s not counting spellings like Charley, Charly, Charlee, and Charleigh, all of which have seen some use. It’s the go-to choice, an adorable nickname for a daughter or a son. And while it often tops lists of pet names, too, that takes nothing away from Charlie’s considerable charm.

Like Charlie, Arlo stands on its own. In fact, it’s hard to see Arlo as one of the Charles nicknames. Except it’s obvious, too. Carlo is the Italian form of the name. Drop the C, and there you have it. Even in English, chARLes is right there.

Feminine forms of Charlies, like Charlotte and Caroline, shorten to Callie. It follows, then, that Charles would shorten to Cal. It lends the buttoned-down formal Charles a sort of sporty-cowboy casual cool. And if you love Cal, but can’t embrace Calvin or Calder, then this might be ideal.

The Hawaiian form of Charles is the green and leafy Kale. In Scandinavian languages, it’s Kalle. All of these are pronounced with two syllables – not exactly Callie, but close. Spelling it with a C edges a little closer to Charles.

Carl doesn’t quite fit with Charles nicknames. After all, it’s another version of the name, familiar in German, as well as much of Scandinavia. Karl is also heard throughout Europe. In the US, Carl is out of favor nowadays. But if you’re a Charles looking to reinvent yourself, the capable Carl might be worth a thought.

If Luca and Mateo are stylish, how about Carlo? It’s an Italian heritage choice with that lively ‘o’ ending. Over the years, plenty of families have put English versions on the birth certificate, but used a heritage choice at home. Your Charles-called-Carlo wouldn’t be the first.

In some languages, Charles is Carol. That’s why one feminine form of Charles is Caroline, and Caroline becomes Carrie. So could Charles shorten to Cary? Cary Grant and Cary Elwes remind us that the name has impeccably masculine roots. But using it as a sweet nickname for Charles might feel like the perfect combination.

Strictly speaking, Chad comes from Old English roots – and has nothing to do with Charles. But the two names share the same first syllable. That’s enough to make a casual connection, and cement Chad as a possible Charles nickname.

The original famous Charles ruled much of western Europe as the very first Holy Roman Emperor, beginning in the year 800. Charlemagne simply means Charles the Great. It’s not a nickname like Charlie or Chuck, something you might embroider on your son’s lunchbox. But it is a fun Charles nickname option, if only at home. Royalty has used the name ever since, though, from the British throne to Sweden (King Carl XVI Gustaf is the current monarch) to Romania, where the country’s very first king was Charles – or Carol. And in Spain, multiple kings have answered to Carlos.

This one has been around for a while. Actor Chazz Palminteri helped put it on the map – though he was born Calogero, not Charles. Chaz has a split personality: one-part prep school student on the crew team, and one-part tough guy. A bonus? In any spelling, Chaz is a familiar short form of the name, even if it isn’t a super-common one.

Chase strikes a balance between the classic William-James-Joseph kind of choices and the fresher Finn-Cole-Knox current favorites. It’s not a big leap from Chaz to Chase – the sounds are clearly there.

Charles has shortened to Chick for ages. If you’re a fan of Disney’s Cars series, you might think of Chick Hicks, the racing veteran.

Often a nickname for Charles or sometimes Christopher, Chip might also be another version of Junior – think of the phrase “chip off the ol’ block.” It’s a little retro, but lots of fun, too. Kids might also think of Chip as in chipmunk, one half of Disney animated duo Chip and Dale.

Parents often hesitate to choose unconventional nicknames. But turns out that we’ve been doing this forever. Chuck started out as an affectionate nickname, sort of like Buddy. It reminded us of Jack, short for John, and Hank, short for Henry. Over time, it only seemed logical that Chuck would attach itself to Charles. Wait a few centuries, and it’s now considered traditional.

Hal usually goes with Harold, or sometimes Henry. But if Cal works for Charles, maybe Hal does, too? Again, the letters are waiting right there: cHArLes.

Motorcycle enthusiasts have given this surname name to their sons and daughters over the years. But following the drop-the-C logic for Hal, couldn’t Charlie lead to Harley? It’s a high-octane kind of name, one that might feel balanced out by the buttoned-up formal name Charles.

One last drop-the-C possibility: Chuck transforms to Huck. It’s a little bit of a stretch, but maybe a worthwhile one. After all, formal names for Huck are few. There’s Huckleberry, as in Finn, but that’s quite daring. Huxley might be the obvious choice. But just like parents centuries ago married Chuck to Charles, Huck seems like a logical short form to embrace today.

American parents probably aren’t going to consider this Polish nickname for Charles. But it’s worth mentioning, if only because it’s the childhood nickname of Pope John Paul II, born Karol Wojtyła. Adding -ek is a favorite way to form diminutives in Polish; the Lo- comes from the second syllable of Karol. It’s not intuitive, but there’s no question it’s a Charles nickname associated with a notable figure.

Charles often appears as part of a double name, typically with John. There’s the Italian Giancarlo. The Spanish Juan Carlos is another familiar form, the name of many famous people, including royals – the former King Juan Carlos I of Spain abdicated in 2014. In France, Jean-Charles is sometimes heard.

Each of these options opens the door to even more nickname possibilities.

SHOULD YOU SKIP THE NICKNAME?

In an age when more and more boys are James, not Jimmy, or William, not Bill, there’s no reason a Charles can’t be … Charles. Unlike so many classic names, this one does feel a little more serious than some. Maybe it’s the image of Prince Charles, the eldest son of Queen Elizabeth I, and still the heir waiting in the wings, even though he’s in his 70s himself.

American parents might reasonably dismiss the impact of the British royal family on naming trending in the US. And yet, they’re constantly in the headlines. Whether it’s the legacy of the still beloved Princess Diana or stories about the Sussexes – that’s Prince Harry and Meghan Markle – it’s tough to avoid some awareness of their comings and goings. And that emphasizes Charles as a name that reads a little bit older.

That said, meeting one adorable Charles-not-Charlie (or Arlo or Huck or Chase) would probably be all that’s required to change all of our mind about using the formal name in full.

Do you have any favorite Charles nicknames? 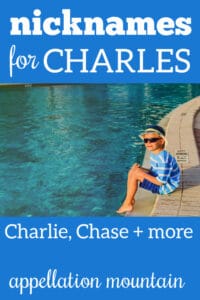 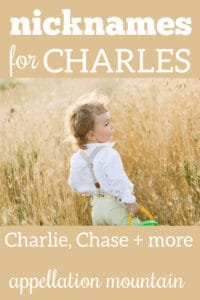