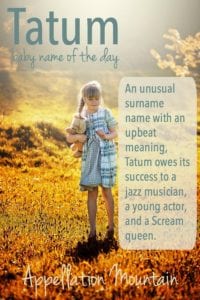 Tatum took off in the 1970s, thanks to a celebrity baby name and the youngest-ever Oscar winner.

Thanks to Abbie for suggesting our Baby Name of the Day, one she’s considering for a future daughter.

You might guess that Tatum started out as a surname – and you’d be right.

Also spelled Tatham, it comes from an Old English given name, plus the common ending -ham, for homestead.

Tata is shrouded in mystery. It also gives us surname Tate, but that offers no clues as to the name’s meaning.

It might relate to the Old Norse Teitr or Teit, which means cheerful. Old Norse and Old English mixed and mingled, especially from the 800s to the 1000s when Viking raiders became settlers. Bleak and blunder, cake and creek, glitter to gust all come from Old Norse during this period, so it tracks.

Ethelburga of Kent, wife of King Edwin of Northumbria, answered to the nickname Tate, presumably because she was cheerful. Their sixth century marriage helped convert northern England to Christianity, and she’s considered a saint.

It makes for more history than you might expect from such a modern name.

Credit for this name’s rise is down to one factor: a celebrity kid. But not just any celebrity kid – she quickly became a star in her own right.

Born in 1963, Tatum Beatrice O’Neal was the daughter of actors Ryan O’Neal and Joanna Moore. Her dad had not quite hit it big – a year later, he joined the cast of smash hit drama Peyton Place and became a household name. Movie roles followed, like 1970’s Love Story.

But it’s 1973 that matters. That’s the year O’Neal and his young daughter co-starred in the Depression-era dramedy Paper Moon. The movie earned Miss O’Neal an Academy Award for her performance, making the 10 year old the youngest Oscar winner ever.

The younger O’Neal stayed in the headlines, as much for her personal life as her professional one. She dated Michael Jackson, and later married tennis champ John McEnroe.

For years, many assumed that her unusual name must come from the O’Neal family tree. Not so. While Ryan is of Irish and English descent – as well as Ashkenazi Jewish on his mother’s side – the name claims a different source.

Miss O’Neal claimed that she was named for jazz pianist Art Tatum.

Born in 1909, the musician is considered one of the greatest jazz pianists of his generation. He died in 1956, but his recordings were widely available, so the timing makes sense.

Tatum: By the Numbers

Speaking of timing, let’s take a look at the numbers.

In 1966, Tatum debuted in the US Social Security data, with five girls receiving the name. That’s a few years after Miss O’Neal’s birth, right around the time her dad found stardom. Here’s guessing some interviews mentioned his daughter’s distinctive name.

But it took Paper Moon to make a real impact. In 1973, the name was given to 9 boys and 25 girls.  A year later, with that Oscar win making headlines, those numbers were 14 boys and 83 girls.

Through the 1980s and 90s, the name chugged along, kept in the spotlight by the actress, but not rising dramatically in use – and never cracking the Top 1000.

By the late 1900s, of course, names like Taylor and Madison were all the rage. This one fit right in.

The handsome actor has helped push this surname back towards Team Blue.

Tatum: Under the Radar Possibility

All of this makes Tatum a quietly under-the-radar option. The name feels like it has history, thanks to Miss O’Neal star turn way back in the 1970s. But it also seems fresh and modern, especially because it peaked without breaking into the US Top 300.

If you’re looking for something that everyone recognizes but few children will share, something with a unisex, modern-but-not-invented feel, then Tatum makes for a winning possibility.

What do you think of Tatum? Do you like it better for a boy or a girl?