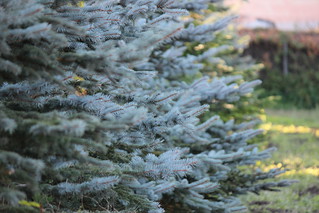 He’s an evergreen name for the winter season.

Thanks to Kristine for suggesting Tannen as our Baby Name of the Day.

Tannen comes from the German word for fir tree, tanna.  It seems to apply mostly to pine, but that’s not the current name for the tree – in German, a pine tree is called Kiefer.

But tannen and tannin have interesting histories of use, and have influenced many a word and name over the years.

As a place name, Tannen is found on the map throughout Germany.  There’s Tannenberg, the site of 1410 battle.  The powerful German Knights of the Teutonic Order were defeated by a Polish-Lithuanian army.  The victory loomed large in stories and legends, though it is typically referred to as the Battle of Grunwald in Polish.  A major reenactment takes place every year on the battle’s anniversary.

It was also the site of a World War I battle between the Germans and the Russians – sort of.  The fighting took place a few miles away, but when the Germans were victorious, they reclaimed the name Tannenberg to emphasize that they had made up for the loss from 500 years earlier.

Chances are you hear the name and think “O Tannenbaum,” as in the Christmas carol.  The tune is borrowed from a sixteenth century folk song.  It was once a love song about a faithless maiden.  But in the nineteenth century, the tradition of decorating a Christmas tree became common in Germany.  There are multiple versions of the lyrics, but today they all emphasize the tree as a symbol of loyalty: “how steadfast are your branches.”

Tannen is also oh-so-close to Tanner, an occupational name for one who tanned hides into leather.  Tanner comes from tannin, a substance derived from tree bark, usually oak, used to dye animal hides as part of the leather-making process.  The Breton tann means oak tree, and in Medieval Latin, tannum was the crushed bark used for dying.

Tannin is also part of wine – “a textural element that makes wine taste dry,”according to Wine Folly.  In many cases, tannin also comes from trees, via the wooden barrels used to age wine.

Back to Tannen.  He’s rare as a given name, but notables answering to the surname include:

Add it up, and Tannen is a surname name with a nature vibe and place name ties.  He’s an alternative to chart-toppers like Jordan and Mason and Dylan.

Odds are you’ll never meet another.  He gained in use during Tanner’s heyday, the 1990s, and six boys received the name in 2012.   But even in his peak year, just 11 boys were named Tannen.

As a given name in 2014, he feels just right for a Christmas baby or winter arrival.  And yet, he’s not so tied to the season that he wouldn’t work throughout the year.  He’s a great find on your family tree, or an interesting possibility for parents after something just a little different.