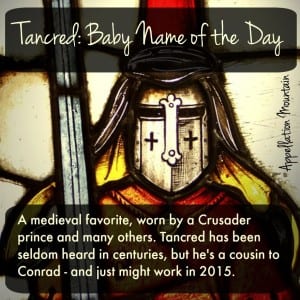 Ready for a rarity? Today’s choice is an all-but-forgotten blast from the past!

Thanks to WF for suggesting Tancred as our Baby Name of the Day.

There’s the English Tancred, the Italian Tancredi, the French Tancrede, and the Spanish Tancredo. No form of the name has ever registered on the US Social Security charts. That’s really rare.

But this name once was reasonably well known. It comes from the Germanic elements meaning thought and counsel – the second element is shared by stylish Conrad.

Let’s start with the most famous bearer of the name. Born around 1075, he set off for the Holy Lands with the First Crusade in 1096. The crusaders took Jerusalem, and Tancred became Prince of Galilee.

Legend has it that he behaved honorably on several occasions. Most notably, he tried to save a group of Jerusalemites who took shelter at the Temple of Solomon. Tancred also served as regent for his uncle Bohemund, Prince of Antioch.

But it’s a fictional version of the crusader prince that is better known. Torquato Tasso penned Jerusalem Delivered in the 1500s. His Tancred was based on history, but only in part. His love interests, the pagan warrior Clorinda and the Christian Princess Erminia, were both inventions.

Monteverdi retold the story of Clorinda and Tancredi in an operatic scene in the seventeenth century. Then came operas by Campra in 1702 and Rossini in 1813.

There was no shortage of opportunities for parents to re-discover the name, and yet it seems to have remained rare over the years.

The Prince of Galilee was named after his ancestor, Tancred of Hauteville, who lived in the early eleventh century. He married twice, had twelve sons and a couple of daughters, and their descendants went on to marry well. Their family tree is packed with interesting names: Muriella, Fressenda, Serlo, Drogo, Mauger, Aubrey.

A handful of other men wore the name, many of them also Hautevilles, including:

In Alan Bradley’s Speaking from the Bones, young crime-solver Flavia de Luce finds a body in the tomb of St. Tancred. There were two distinguished Dominican friars in the twelfth and thirteenth centuries by the name, but neither is listed as a saint. But there is a Tancred of Thorney, a monk who died in the ninth century at the hands of Viking invaders – a martyr saint.

Tancred also survives as a surname, sometimes Tancredi. But it’s also the source of Tanqueray – as in the gin, named after Charles Tanqueray, the Englishman who first distilled the spirit in London in 1830.

Tancred: All But Forgotten

It’s hard to explain why some obscure names survive and others are discarded. Tancred seems especially accessible – it is spelled and pronounced exactly as you’d guess.

If you’re after a medieval rarity that will surprise, Tancred could be the name for you.

What do you think of Tancred? Is it best left to obscurity, or ready for revival?